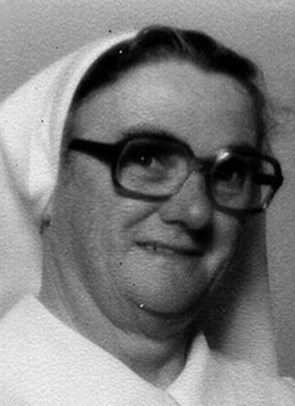 Eileen was born in Weston on 8 October 1922, the youngest and only girl in a family of eight children of James Henry Page and Florence Reville. She entered the novitiate at Lochinvar on 7 October 1942 and, as Sister Mary Dominic, was professed as a Sister of St Joseph on 4 July I945.

Sharing her knowledge and patiently instructing children who needed extra assistance was a special service Eileen enjoyed. She had little ditties, poems, jingles which she would use to make their time more pleasant. She did not seek after great acclaim; she was content to live simply, generously and meekly. Her deafness added to her natural shyness and self effacing disposition. She gifted little children with her prayerfulness when she prepared them for First Communion. Even when retired she was generous with her time and skills, helping other teachers by taking under her wing children with particular needs, assisting with Sacramental programmes or frequently making a special morning tea for the school staff.

Eileen was one of the original group of Sisters who became residents of the Southern Cross Tenison Apartments at Swansea when the facility was opened in 2003. When her health declined she had to move to the Garden Suburbs Nursing Home after serious surgery on her leg.  She accepted the situation with admirable patience and peace.

Sister Eileen Mary died peacefully at the Garden Suburbs Nursing Home on Saturday 24 September, 2005. She would have celebrated her eighty-third birthday on 8 October and her Diamond Jubilee as a Sister of St Joseph on 29 October.

After her Funeral Mass in the convent chapel Sister Eileen Mary Page was laid to rest in the Sisters’ section of the Lochinvar cemetery.