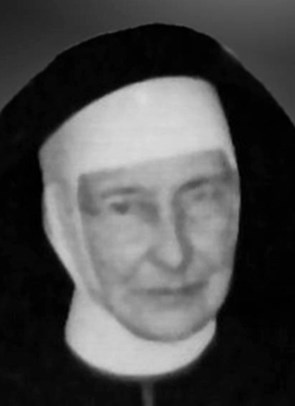 Eileen Moylan was one of the eight children of Thomas Moylan and Mary Jane Landers. She was born at Brookfield on 9 June, 1895. Her grandparents, Michael and Mary Moylan came from County Clare in Ireland. Eileen’s two brothers, Pierce and Joseph were farmers; her sisters were Genevieve, Jean, Marie, Julia who became Sister Mary Irenaeus and Hyacinth who became Sister Mary Bernard of the Good Samaritan Sisters.

In 1914 on the Feast of the Epiphany, Eileen entered the Novitiate at Lochinvar and was given the name of Sister Mary Borromeo. She was professed as a Sister of St Joseph on 4 July, 1916. After her profession she began her ministry of teaching in primary schools throughout the Diocese of Maitland and beyond. She lived and worked in Lochinvar, West Wallsend, Carrington, Kurri Kurri, Krambach, Wauchope, Cardiff, Abermain, Cessnock at Mt. St. Joseph's and at St. Patrick's and at the time of her death, at Star of the Sea, Newcastle.

She was the local superior in many of those convents. A woman of great faith, she endeared herself to all, was gentle, charitable and always hospitable. She learned first how to serve and, as a superior, she continued to serve. She inspired others to see how they might best use their talents for the glory of God.

Sister Mary Borromeo (Moylan) died peacefully in the Mater Misericordiae Hospital, Waratah, on 25 July 1966, after a brief illness borne with patience and resignation. The Solemn Office and Requiem Mass took place in the Convent Chapel at Lochinvar on 27th July. His Lordship, Most Rev. John Toohey, D.D., presided in the Sanctuary and officiated at the graveside. A choir of forty-five priests chanted the Office of the Dead. The celebrant of the Mass was Rev. Father Brian Walsh with Rev. Fathers Bryan Dunne and F. Hinchey as Deacon and Sub-Deacon respectively.

From excerpts taken from the panegyric given Most Rev. John Toohey