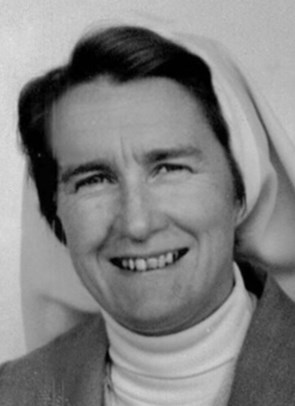 Elizabeth Ann Burgess was born on 14th March 1945 to Michael and Joyce (née Miller) Burgess.  Together with her sisters, Florence, Dawn, Sally and Suzanne, she spent her childhood on the family property at Lambs Valley.  Her Primary schooling was spent at Stanhope Public School and her Secondary schooling at St Joseph’s College, Lochinvar.

On 2 February 1962 at age 16 Elizabeth entered the Sisters of St Joseph at Lochinvar taking the name, Sr Mary Romuald.  After her Profession on 30 July 1964 Elizabeth was appointed as a Secondary School Teacher first at St Joseph’s High School Merewether, then at St Mary’s High School, Gateshead. She served as Assistant Principal, St Joseph’s College, Lochinvar, and as Principal from 1985-1990  at St Clare’s High School, Taree.   She maintained a lively interest in all things educational and she enjoyed spirited contact with former students and teaching colleagues.

After serving in Taree, Sr. Elizabeth was appointed Congregational Bursar for the Sisters of St Joseph, Lochinvar, and she served in that role for 9 years.  She was deeply involved with Catholic Care of the Aged, the Catholic Development Fund and the Catholic Schools Office, taking on the role of Justice of the Peace (1988) to assist with business and legal matters.

Elizabeth was strongly committed to the life and mission of the Sisters of St Joseph, Lochinvar, and to living Religious Life as authentically as possible.  She enjoyed vigorous discussion about the present and future of Religious Life and often matched her wits with others in visioning new ways of community living and fresh forms of ministry within the world and Church today.

Elizabeth was a naturally reﬂective person, a clear thinker, a no-nonsense woman with a great ability to balance many different facets of her busy professional life with the prayer-focussed life of a committed religious. She tried to live uncompromisingly by the example of the Jesus of the Gospel, who formed her own beliefs and principles and guided her actions. She was a just woman, much loved and valued by her family, her Sisters and her many friends. Good friends and sincere friendships were very important to her.

In 1999, having being diagnosed with terminal cancer, Elizabeth reluctantly gave up all her work commitments and put her energies into what she called “living with a life-threatening illness”,  determined to live a satisfying life while she was able.  Her death came unexpectedly on 24th September, 2002.   She is buried in the Sisters’ cemetery Lochinvar.