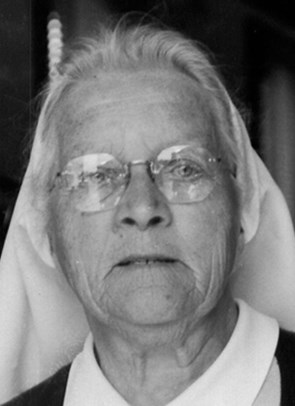 Ellen Kathleen was born to James O'Donnell and Teresa McGrorey in West Wallsend on 20 January, 1905. She was a strong person, proud of her origins and her family’s strong faith.  An example of this strong faith tradition was the story of her mother as an infant being carried by her own mother on horseback from Merriwa to East Maitland to be baptised.

Ellen and her O'Donnell relations were among the original pupils when the Sisters of St Joseph first went to West Wallsend in 1912. From that association the young Ellen felt drawn to the Sisters and so entered the Novitiate at Lochinvar on 11 June 1925. Although she was born in West Wallsend, her family had moved to Sydney so it was from Kogarah that Ellen came to Lochinvar. Ellen was given the name Sister Mary Madeline Sophie and was professed on 4 January, 1928.

In the fifty-nine years that followed, she served as an Infants teacher, visitor of the sick and aged and the not so aged, was chief gardener, sacristan and "jack of all trades" in a great number of places: Kurri Kurri, Cardiff, Cundletown, Carrington, Lochinvar, Aberdeen, Abermain, Krambach, Dungog, Wingen, Bellbird, Kendall, Denman, Lochinvar, Morisset, Swansea, Windale and Wauchope.

As an Infants teacher she had a special place in the lives of the children she taught, as she prepared them for the sacraments. Sophie was a truly dedicated woman, faithful to prayer and to the Blessed Sacrament.  With a zest for life and sense of humour, she was a great support to members of her community, always ready for a cup of tea and a chat.   She listened, challenged, cajoled and laughed.

Sister Mary Sophie was going to her annual Retreat when she took ill at Taree and was taken back to the Hospital in Wauchope where she died from a coronary occlusion on 6 July 1987. Sophie died as she lived, among the people she loved and worked with in Wauchope. Her Funeral Mass was celebrated in the Convent Chapel at Lochinvar on the 8 July. Mons Philip Wilson was the principal celebrant and Father Colin Reinhard from Wauchope gave the homily.  Sister Mary Sophie was laid to rest in the Sisters’ section of the Lochinvar cemetery.