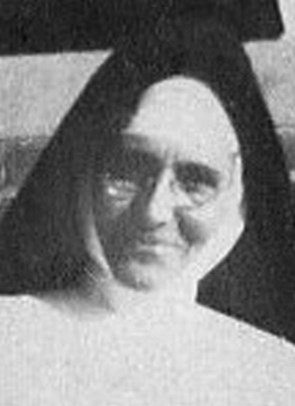 Ellen Philson was born in Largs on 20 December 1872, the second daughter of Thomas Philson and Annie Duggan.  She finished her schooling at Lochinvar and entered the Novitiate on 25 February 1888 where she was given the name Sister Mary Rose of the Holy Cross.  Her eldest brother known as Brother Alphonsus Mary was a well known member of the Marist Brothers’ Congregation. A younger sister, Sister Mary Julian died at Lochinvar during her Novitiate on 13 November, 1891.

Sister Mary Rose taught in many of the schools, her first appointment being to Brookfield.  Later she was appointed Local Superior and held that office in different convents for many years, ministering in Lochinvar, Merriwa, Largs, Carrington, Cessnock, Burwood, Wingen, Krambach, Dungog, Cundletown, Kurri Kurri, Port Macquarie, West Wallsend, Cardiff, and Swansea.

A great organiser, Sister Mary Rose worked devotedly for the improvement of the school wherever she was.  She was also known and loved for her kindness to the poor and suffering around her.  A prayerful person she did much for her Congregation even in her failing health.  She was a remarkably fine teacher and was loved by her pupils. She spent many years at St Joseph's Convent, Dungog and the Largs parishioners continued their friendship with Sister Mary Rose right down the years

A few days previous to her death, Sister was anointed and received all the rites of the Church and died on 3 June 1959. As Sister died a day after Sister Agatha Bussell, her Requiem Mass was offered in union with Sister M Agatha's Mass on 3 June.  Rev Brian Walsh and old pupil of both Sisters Rose and Agatha was the celebrant with Fathers Heffernan and Harold Campbell also an old pupil of Sr M Rose.  Sister’s four nephews were the pall Bearers.

Sister Mary Rose was buried in the Sisters’ section of the Lochinvar on 4 June, 1959.