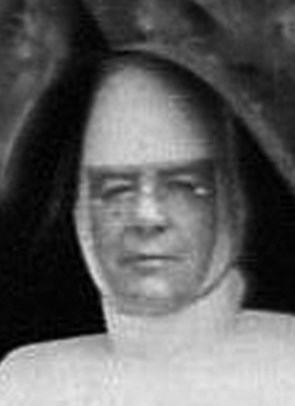 Eva Mary Stanton was born in Lambton on 15 July 1882 to John and Frances (McDermott) Stanton. Their family of nine children lived in Merewether. Her father’s occupation is recorded as curator of reservoirs.   Eva entered the Novitiate at Lochinvar in 1900, was given the name of Sister Mary Bernadine and was professed as a Sister of St Joseph on 15 January, 1900 in the presence of Rev Dr Murray, Bishop of Maitland.

After her profession Sister Mary Bernadine began her ministry of teaching and was stationed in Taree, Abermain, Merriwa and Cundletown. She was a most successful infant school teacher; some said she was a born teacher. She always called the little ones "My Holy Innocents." Her First Communion class was always a delight to encounter.

Sister Mary Bernadine died quite unexpectedly on 29 September 1949. She had been admitted to the Mater Hospital in Waratah for heart trouble but had apparently recovered from the attack when a sudden seizure occurred on the date mentioned and within a half an hour she had passed away after receiving the last Sacraments.

Her death was mourned by a large circle of relatives and friends including her many pupils grown to adolescence and beyond. At Taree, where she had spent many years and was universally loved, a Requiem Mass for her eternal repose was celebrated in Rosary Church on the morning of the solemn obsequies at Lochinvar which took place on 30 September. The Bishop, Most Rev Edmund Gleeson CSsR presided and thirty two priests attended the funeral in the convent chapel. Sister was paid to rest in the Sisters’ section of the Lochinvar cemetery.