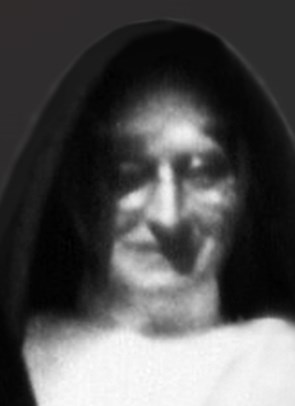 Gertrude O'Brien was born in East Maitland on the 26 January 1894, the third daughter of Owen and Catherine O'Brien. She went to school at the Dominican Convent, Maitland, and completed her studies at Lochinvar. On the 9 May, 1912, Gertrude came back to Lochinvar, entered the Novitiate and was professed on 7th January, 1915.

She willingly took on the life of a Sister of St Joseph and went from school to school, from Lochinvar to Cessnock (St Patrick’s), Carrington, Cardiff, Wingen, Brookfield, Denman, Kurri Kurri, Aberdeen, Cessnock (Mt St Joseph’s), Taree, until her last six years at St. Joseph's, Merewether.

She was a painstaking soul, one who always wanted to give her best, with an intensity given to detail. She wished to extricate the maximum from each day for the glory of God and for the good of others. She was meticulous in everything she did, and yet one could easily intrude on her time to get advice, to benefit from her experience in a life devoted to teaching.

The death of Sister Mary Madeline O’Brien was unexpected as she had performed all her duties in the classroom and convent up to the hour before retiring when she was stricken with a cerebral haemorrhage from which she did not recover.  Father was summoned and anointed her, and then unconscious she was taken to the Mater Hospital in Waratah where she lingered a few days. Her death came on 9 July 1959.

Holy Mass was sung by Rev. Father Brennan of Merewether with the Reverend Timbs (Deacon), Rev. J. Barry (Sub-Deacon), Rev. B. McCosker (Master of Ceremonies). The Cantors were the Reverends G. Flatley and J. Delaney. Immediately after the pronouncing of the Absolution, His Lordship spoke with feeling of the esteemed deceased Sister, expressing his sympathy with her relatives and the Community.

Sister Mary Madeline was buried in the Sisters’ section of the Lochinvar cemetery.

Excerpts taken from the Lochinvar Magazine 1959