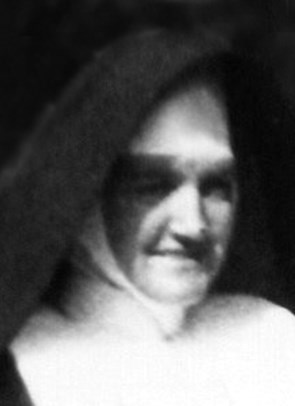 On Sunday night, 28 April, 1968, the death occurred at St. Joseph's Convent, Lochinvar of Sister Mary Ambrose Moylan after an illness of many weeks borne with patience and resignation.

Sister Mary Ambrose was born on 14 July 1888 in Dungog and was baptised Jane. Her father was John Moylan and her mother was Margaret Byron.

Jane entered the Novitiate of the Sisters of St Joseph at Lochinvar in 1909 and was given the name Sister Mary Ambrose. After her profession she ministered in Cessnock (Mt St Joseph’s), The Junction, Wauchope, Aberdeen, Merriwa, Swansea, Krambach, Gresford and Lochinvar.

Sister's life was typical of the life of a Sister of St. Joseph. It was a life of service. Service of God, service of her Sisters and service of others around her. Children loved her. Not only did Sister Mary Ambrose do much for children but she was helpful with all. Her work brought her into contact with many people and to these she was always ready to give a word of encouragement and advice which was so often needed and so much appreciated. Her life of love of God was shown in her service for all with whom she came in contact.

The solemn office and Requiem Mass took place in St. Joseph's Convent Chapel on Tuesday, 30 April. Right Rev. Mgr. Casey presided in the Sanctuary, and a choir of twenty-eight priests chanted the Office for the Dead. The celebrant of the Mass was Right Rev. Mgr. Casey.

Sister Mary Ambrose was buried in the Sisters’ section of the Lochinvar cemetery.