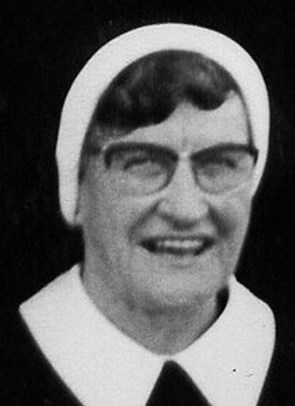 Kathleen McGinley was born to John McGinley and Brigid McMahon on 17 May 1899 at Morpeth.

A bursary took her to secondary education at St Catherine's, Singleton and then, six months office work in Maitland, before helping out with teaching at Lochinvar for nine months before entering on 23 January 1920 where she was given the name Sister M Columbkille of the Immaculate Conception.  She was professed on 6 July 1922.

During her long life Sister served in three Dioceses: the Maitland Diocese where she taught in Lochinvar, Merewether, Taree, Wingham, Belmont, Bulahdelah, Kurri Kurri, Cessnock, Carrington, Aberdeen and Dungog; the Lismore Diocese, where her work in Wauchope, Port Macquarie and Kendall and  the Sydney Archdiocese where she loved her times in Summer Hill.

An endearing quality was her championship of the young. Her pupils, especially lonely Boarders, always knew they had an ally in Sister Columbkille. She much preferred teaching in co-ed schools. She used to say she found a great balance in having boys in the class along with girls and the boys loved her, in and out of the classroom.

Generosity was a hallmark of Sister Columbkille who was generous and openhearted with everyone.  A great community member she loved fun and loved life, never letting things get her down.   That was how she coped for the last twelve years of her life when she had a stroke and before that after a car accident during her time in Summer Hill. She had to learn to walk again, to talk again, and to love again with less than the life she had so loved.  This she did bravely because she had trained herself "not to let things get her down."

Sister Mary Columbkille died in the Nursing Home at Lochinvar on 27 April 1992, just three weeks short of her ninety-third birthday.

Excerpts from Words of Remembrance given by Clare Tobin rsj