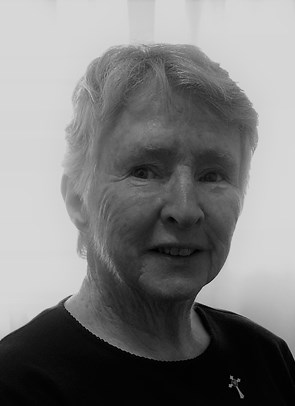 Kathryn was born in Sydney on 19 July 1937, the daughter of James McCabe and Mildred Ruane. In the family there were three girls, Madge, Kathryn and Mildred and four boys, Brian, Peter, Anthony and Frank.   Kathryn (known as Kay in the family) grew up in Cessnock and went to the local parish primary school before attending St Joseph’s College in Lochinvar, as a boarder for her secondary education.

Kathryn entered the Novitiate at Lochinvar in 1956 and was given the name of Sr Mary Nicolas of the Sacred Heart.  She made her first Profession as a Sister of St Joseph in 1958.  As Sr M Nicolas she ministered first as a primary school teacher and then as principal in a number of parish schools in the Maitland-Newcastle diocese and beyond in the Archdiocese of Sydney, the Lismore diocese and in Parkside (Ayr) in North Queensland.

In 1993 Sr Kathryn spent a renewal year at the Columban Mission Institute. Following her departure from the school ministry, Kathryn worked as a Pastoral Associate in the parish of Cessnock before moving to Forster-Tuncurry in 1994 to coordinate the program for the sacramental initiation of the children in the parish.

Five years later she became involved in the Catholic Aboriginal Ministry - a ministry that she never regarded as work but more the forming friendships with the Biripi and Worimi peoples.   This friendship was evident in the number of Koori people who came to her Funeral Mass.  Their last gesture was the placing of the Aboriginal flag on her casket as it was lowered into the grave.

Early in 2019 Sr Kathryn came down from Tuncurry to seek treatment as she was unwell.  The medical report revealed that she had an advanced cancer.  She never returned home but instead stayed in Newcastle and received palliative care, supported by her family, friends and fellow Sisters. Sr Kathryn died quite suddenly and peacefully about 11:00pm on 2 April.

On 10 April, in St Patrick’s Church Lochinvar, Father Kevin Corrigan, former parish priest of Foster –Tuncurry presided at the Funeral Mass for Sr Kathryn together with nine concelebrants and two deacons. Following the Mass, she was laid to rest in the Sisters’ section of the Lochinvar cemetery until her loving God awakens her to glory.

Based on the Words of Remembrance given by Carmel Hanson rsj