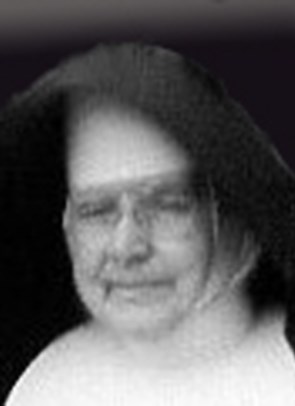 Sister M. de Sales (Lucy Johnson), daughter of John Johnson and Mary Smith, was born in Lyndhurst Vale, Brookfield on 8 August 1882, just a year before the Sisters of St. Joseph came to Lochinvar. She was one of a large family of four sons and four daughters.

Lucy received her early education at St Joseph’s school at Brookfield, which was then a very flourishing one, and thus first came in contact with the Sisters of whose Order she was later to become a member.

In 1901 she entered the Novitiate and at her death had spent fifty-five of her seventy-five years in religious life.  Sister had been Superior in many Convents and Headmistress in many schools ministering in Lochinvar, Largs, Carrington, Wingen, Burwood, Kurri Kurri, West Wallsend, Wingham, Taree, Abermain.

Her Golden Jubilee was celebrated in January 1954, and in August because she was not very well she was sent to Swansea to rest. It was here that she died.  Although always of a frail constitution, Sister was at her ordinary duties up to an hour before her death. On Sunday 21st October after attending afternoon prayers, Sister had a sudden Cerebral Haemorrhage seizure. Priest and doctor were summoned but she had passed quietly away within half an hour of the attack.

The solemn obsequies, Office and Requiem Mass were celebrated in the Convent Chapel at Lochinvar on Tuesday, 23rd October, Rt. Rev. Mon. Peters V.G. presiding in the absence of His Lordship, Dr Toohey. The celebrant of the Mass was Rev. Father O'Connor of Swansea, with Rev. Fathers Smythe and Linehan as Deacon and Sub-Deacon respectively. Rev. Father Hanrahan was Master of Ceremonies while Cantors were Rev. Fathers Withnell and Delaney.