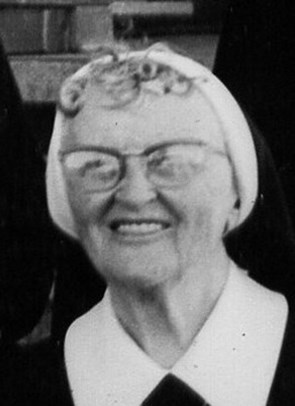 Sr Adrian, Anne Angela Walsh, was born on Christmas Day in 1899, the seventh in a family of twelve children born to James Walsh and Mary McNamara of Brookfield. Her early schooling was at Brookfield Convent School, and later as a boarder at Lochinvar. School days over she worked in the pharmaceutical department of Grace Brothers in Sydney for a time.

Anne Angela Walsh became Sr. Mary Adrian of the Love of St. Joseph on the 23rd of January, 1920 when she entered the novitiate of the Sisters of St. Joseph. She made her First Profession on the 5th of July, 1922, and shortly afterwards began her teaching apostolate at Denman as music teacher. In the ensuing years she was to work in most of the schools founded by the Sisters of St. Joseph in the Maitland and Lismore Dioceses. She worked both in upper primary classes and as music teacher, very often in the dual role.  Teaching both school and music was an arduous task, especially when, as in Sr. Adrian's case she filled the role of principal as well. Music lessons before and after school, and a full day of classes made for a long demanding day from which Sr. Adrian never shrank, and of which she never complained and this often in a school church.

In 1968 Sister resigned from the school work and devoted herself to teaching music alone.  In 1976 she came to Lochinvar in semi retirement but still taught music to a small group, of students. In 1984, when the Primary School moved across the highway Sr. Adrian eventually called a halt to an active apostolate of over sixty years devoted to educating the youth of Australia.

As a teacher of both school and music Sister was encouraging to her students, enthusiastic and efficient, traits which her pupils were able to recognize, appreciate and remember. Remember they did, and often sent messages of appreciation for the inspiration she gave them.  A retired gentleman in Maitland asked if Sr Adrian was still alive. "She taught me in 1929," he said. Then adding:-"They were great days! ''

Sister Adrian was a woman of deep faith with a wholehearted belief in the goodness and providence of God.  She recited many Rosaries and made frequent visits to the chapel each day, and often made the Stations of the Cross several times a day, "Going round the Stations is good exercise," she remarked once with a twinkle in her eye.

She was a decisive person who was able to 'let go' and move on in new directions and face new challenges in her life without regrets for what had or had not been.  She never forgot to say "Thank you" no matter what length of time elapsed since the service was rendered.  This was especially notable in her later years.

Sr Adrian died peacefully in St Joseph's Nursing Home Lochinvar on the 19 September 1994 and is buried in the Sisters’ Cemetery at Lochinvar.