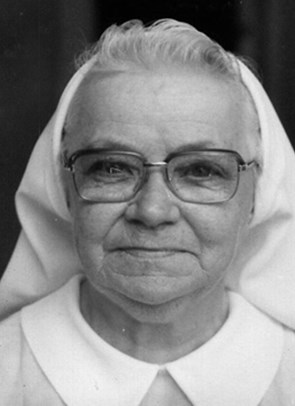 Anne Elizabeth Greer was born on 17 September, 1908 at Blandford in the Murrurundi Parish of the   Upper Hunter.  She was baptised at home on the same day. Anne was the fourth daughter and the sixth child of William Greer and Mary Anne O'Brien. They were married in the January of 1901 and provided a wonderful family life, full of faith for their ten children.  Anne’s siblings were Kate, Maria, Gertie, Barbara, Barnie, William Eugene and Mick. Two brothers, Robert and Thomas died in their childhood.

Anne came to the Lochinvar Secondary School in April 1922.  In her written records she said of that day that it was “the most miserable day of my life.”  However, on 25 June 1927, at the age of eighteen Anne returned to Lochinvar to enter the Novitiate and was professed as a Sister of St Joseph on 2 January 1930 as Sister Mary Albertus of the Sacred Heart.

Much of her time in ministry was spent in the country:  in Wauchope, Wingham, Taree, Aberdeen, Port Macquarie, Dungog and Lochinvar.  She was a primary school teacher who also looked after boarders and sometimes taught the secondary school subjects of Business Principles and typing.  She also spent years in city places: at Merewether (four times), Cardiff, Charlestown, Merewether Beach and Newcastle where with Sister Cecelia Collins (Sister Mary Finbarr), she ministered in the Bishop’s House.  In her written record she recalled that those years at Newcastle were “very fruitful years, spiritually and otherwise“.  There she exercised the care, humour, honour and respect that were the values she held dear in her life.

A country woman, she was a great provider, a “no fuss”, dependable person who noticed things that had to be done and saw them through to the end.  She was person of deep faith.  At the end of her life she wrote:  “I am very grateful to all our dear Sisters for their marvellous patience and kindness towards me during a very happy religious life. What the future holds, I leave to God."

Sister Mary Albertus Greer died at Lochinvar on 9 September 1988. Bishop Leo Clarke was the chief celebrant at her Requiem on 13 September 1988.  She was laid to rest in the Sisters’ section of the Lochinvar cemetery.