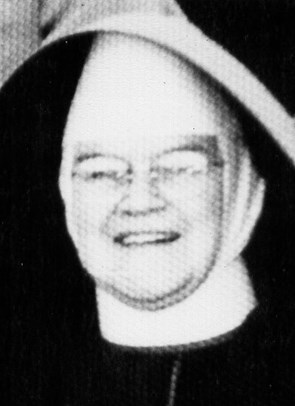 Myra Innes, the daughter of James John Innes and Mary Morris was born at Largs on 8th June, 1902, one of a family of six: Robert, Brice and Arthur, Priscilla and another daughter who became a Little Sister of the Poor and who died in France.

"Myra was taught by the Sisters of St Joseph at  Largs, responded eagerly and was received as a student at Lochinvar. Then came the call to religion. She entered the Lochinvar Novitiate on 3 June 1922 and was professed on 2 January 1924 as Sr M Andrew of the Sacred Heart.

All who have had the pleasure of meeting her could say, 'Here is a true religious.' She was Superior of Cundletown, Port Macquarie, Taree and up to the time of her last illness, of Cardiff. She gave the best to the community in which she lived and was truly a Superior with a mother's heart. She shared all with her religious family and won the esteem of those whom she served.

Sister Mary Andrew passed peacefully to her reward in the Mater Misericordiae Hospital at Waratah on Thursday morning, 18th January, after a painful illness borne with the patience and resignation to God's will which characterised her whole life.

The Solemn Office and Requiem for the repose of her soul were celebrated on Friday, 19th January.  His Lordship Bishop Toohey presided in the sanctuary and a choir of thirty-four priests chanted the Divine Office. The celebrant of the Mass was Reverend Father T. Sylvester of Cardiff, where Sister Andrew was Superior up to the time of her death. Reverend Fathers D. Messenger and P. Guilfoyle were Deacon and Sub-Deacon respectively. Fathers G. Flatley and R. Pickin were the Cantors and Father B. McCosker was Master of Ceremonies.

After the Mass the funeral cortege moved to the Sisters' cemetery, led by the clergy and followed by the Sisters, relatives and friends. The pall bearers were four of Sr Andrew’s nephews.