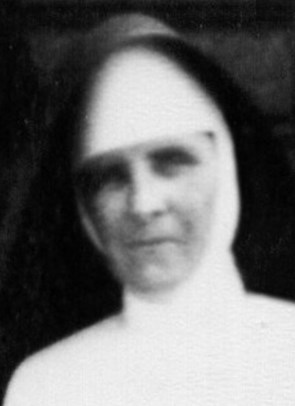 Born Lily Pauline Brooder at East Maitland on 9th July, 1895 to James Brooder and Mary Jane Cavanagh, Sister Mary Anselm was in 89th year of life when she died at Lochinvar on 8th December 1983.

Sister Anselm's mother died when she was two years of age and the four girls and two boys were brought up by their father.

She entered the novitiate at Lochinvar on the 8th December 1915, taking the religious name of Sister Mary Anselm of the Immaculate Conception. Sister was professed on 3rd July, 1918 and made Perpetual Vows on 3rd July, 1924 .

During her years of teaching in schools of the Diocese she taught at Cessnock, Largs, Charlestown, Kurri Kurri, Merewether, Merriwa, Dungog, Windale and Wauchope. In some of these convents as well as teaching she held the role of Local Superior.

In her Apostolate as a Primary Teacher she was gentle and unassuming, at times almost diffident, especially when new educational methods were introduced.  She prepared children beautifully for Confession and first Holy Communion.

She loved music and had a good singing voice. She had a great respect for and interest in people and would give time to them. She loved a yarn!  She was remembered for her good humour and ready wit. Right up to her last days of her life she had a ready amusing response.

She was a very grateful and undemanding person, satisfied with whatever she had and whatever she was given or asked to do. This was particularly evident in the Nursing Home where her faith seemed so much deeper. As one Sister said of her, “She was a person of very deep and simple faith, with life-long devotion to Our Lady. Her Patron, St Anselm, was a great exponent of the Immaculate Conception, and one of Sister's favourite prayers was " O Mary conceived without sin..."

She was totally committed and loyal to the life she had chosen as a Sister of St Joseph; always faithful to her prayers and to the Rule. "Utterly dedicated to the fact that we were born to die", she looked forward to heaven.

Sister died in the Nursing Home on 8th December 1983 and after a Requiem Mass in the Convent Chapel was buried in the Sisters' section of the Lochinvar Cemetery.