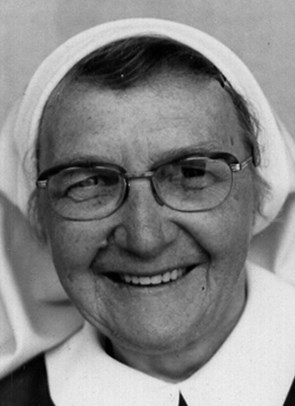 Ellen Fallins was born on 18th August, 1911 at Abermain to James Fallins and Lilla Single. Her father was a Mine Manager. The family consisted of Allen, Ellen, Joyce (Sr Vianney OLSH), Pen (Sr Madeleine OLSH) and Joan (Sr M. Hyacinth who also entered at Lochinvar).

Ellen was educated by the Sisters of St Joseph at Cessnock, the Dominican Sisters at Maitland, the Good Samaritans at Balmain and finished her schooling at Lochinvar Boarding School 1926-1927.  By the time Sister entered at Lochinvar the family had moved to Hamilton and it was from there she came to Lochinvar on 23rd January, 1929 and received the name Sister Mary Athanasius of the Sacred Heart.

After Profession on 1 July 1931 Sister worked in many roles over the years. Sister was a Primary School teacher and also taught music and commercial classes. She was Boarder Mistress in Aberdeen and Superior in the Boarding School at Cundletown for twenty-six years. Other places where she ministered included Carrington, Cessnock, Largs, Krambach, Bulahdelah, Denman, Kendall and Wauchope.

After moving out of education Sister began pastoral work in the parish of Kendall/Laurieton, travelling from Wauchope for some time before working in the local parish of Wauchope.

She had a wonderful cheerful disposition which made her popular with the school pupils, boarders and Sisters.

Sister died at Lochinvar on 8th December, 1993 after some years of illness. Her sister, Sister Mary Hyacinth, was present at her Requiem but it was not many years before she too joined Sister in death on 4 October 1998.