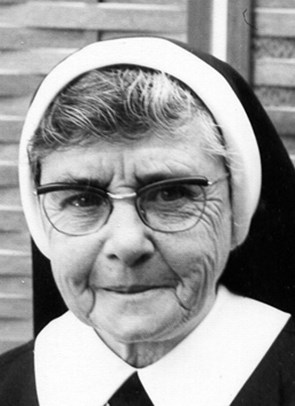 Eileen Tynan was born on 14 January 1900 in Narrandera in the New South Wales Riverina.  Her father was Thomas Tynan, an accountant and her mother was Mary Herriott.

Eileen entered the Novitiate at Lochinvar on the feast of St Joseph, 19 March 1918 and was given the name of Sr Mary Basil of the Joys and Sorrows of St Joseph. She was professed on 5 January 1921.

Sr Mary Basil then embarked on a life of service in the Diocese of Maitland-Newcastle and beyond as a primary school teacher.  She ministered in Cundletown, Gloucester, Merriwa, Carrington, Port Macquarie, Abermain, Aberdeen, The Junction, Cessnock (St Patrick’s), Kurri Kurri, Belmont, Morisset, Merewether Beach, Shortland, Charlestown and Clifton Gardens.

In these places, the parishioners loved and respected her. To the people who visited the Convents, she showed great hospitality. She had a deep love and concern for her ex-students, who often returned to express their gratitude and appreciation.

With her health declining Sr Basil became a resident in the Nursing Home at Lochinvar. Robbed of her physical sight by a stroke she gave one of the best lessons of her life as she adjusted to her blindness.

Sr Basil approached her final days trustingly and prayerfully. She appreciated those who lovingly attended her and seemed to gain a quieter confidence and contentment about what was happening to her.

Sr Mary Basil died at Lochinvar on 6 December 1988 and is buried in the Sisters Cemetery at Lochinvar.