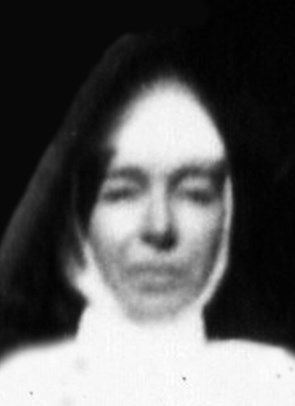 Joanna O’Keefe was born on 28 June 1893, the daughter of Edward O’Keefe and Agnes Flora Livingstone of Merriwa.  She was one of eleven children.

Joanna entered the Novitiate at Lochinvar and was given the name Sister Mary Bernadette. She was professed on 30 January 1913. Later she was joined in the congregation by her sister, Margaret.

Sister Mary Bernadette’s first work was in the Primary Schools teaching at Kurri Kurri, Dungog and Cessnock.  However she was soon brought back to Lochinvar to assist in the Secondary School. In both spheres she was very successful. Her health was not robust, and some years later she contracted an illness that lasted for seven long years. Though always most patient and resigned, she was ever anxious to be back at regular work.

In 1928 Mother Mary Bernadette was appointed to the high and very responsible position of Novice Mistress, a position that she held, not only with the utmost credit to herself but also to her novices and community until 1941, when indifferent health again forced her to retire for much lighter duties. In spite of her suffering, she was ever kind and considerate of others. She was refined, cultured and capable, but ever modest and retiring, never seeking the limelight or applause of others.

No happier circumstances could be imagined than the circumstances of her death. On the morning of her death Mother Bernadette was able to be at Mass and Holy Communion with the Sisters.  Not feeling too well during the afternoon she retired, but even at seven o'clock there was no indication of anything serious.  However, at 7.30pm she had a heart seizure, Father Ward was called and surrounded by all her sisters, received the last rites of the Church in the full possession of her faculties. With perfect resignation to God's will, she died peacefully and happily at 8.15 pm and went to the God she had served with such great love and devotion.

At the time of her death Mother Mary Bernadette was in the 31st year of her religious life profession.