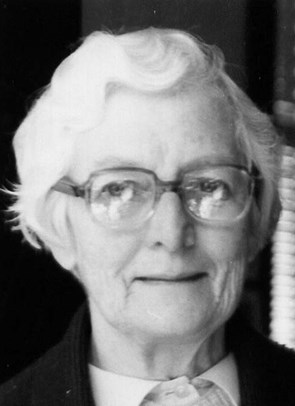 Vera Josephine Nolan was born at Annandale NSW on 14 September 1912. Vera was the second child after Kathleen, of schoolmaster Paul Nolan and Catherine McDonald, dressmaker.  She was followed by four more children: Claire, Marie, Joan and Raymond.  The family lived on the Central coast at Tumbi Umbi and Wamberal and  later moved to Woodville and Aberdeen.  Such movement was a motif of Vera’s life which spanned almost a century.

The usual lack of secondary schooling opportunities in those days meant that Vera came to Lochinvar to board and complete her Secondary education. These were happy years full of friendships that endured for a lifetime.

Vera entered the Sisters of St Joseph at Lochinvar on 28 December, 1932 and was professed as Sr Mary Callista of the Holy Innocents on 2 July 1935.

The broad experience of her early life  came to fruition in  the  years that followed when she could turn her hand to a great variety of teaching spanning the whole range of classes from Kindergarten to Senior Secondary as well as caring for Boarders. She ministered in many parishes: Denman, Lochinvar, Wauchope, Carrington, Cessnock, The Junction, Merriwa, Bulahdelah, Port Macquarie, Taree, Swansea and Charlestown. She was Boarder Mistress in Denman and Lochinvar.

In 1985 Callista retired to Swansea and became caught up in a variety of parish activities such as Catholic Women’s League, St Vincent de Paul, RCIA, Bible Study, small group meetings and visitation of the sick and elderly.  All were interspersed with a great output of craft work that supported the work of Concraft, a ministry of the Congregation.  Such ‘retirement’ lasted eleven and a half years before she moved yet again to Charlestown still keeping busy with her apostolate to the Day Care Centre.

In 1997 Swansea Southern Cross Tenison Apartments became her home for the last decade of her life and there she took on the mantle of the oldest sister in the Congregation.

During the last few weeks Callista suffered a broken arm and was lovingly cared for by the staff at Belmont Hospital until her death on Saturday, 15 January, 2011.