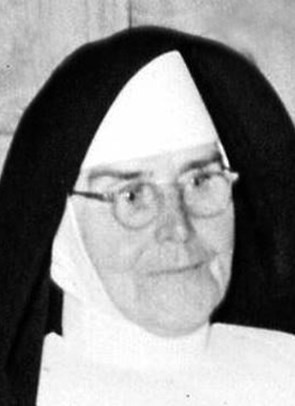 Brigid Roach was born in Merriwa on 4 August 1882, to Thomas Roach and Mary Anne Baxter, the youngest in a family of eight children.

She entered Lochinvar on 23 January 1900 taking the religious name of Sister Mary Camillus of the Divine Infant and was professed, on 7 July 1902. The greater part of her life of sixty eight years since then was spent teaching small children in Cardiff, Krambach, Wingham, Wingen, Cessnock, West Wallsend, Gloucester and Lochinvar how to live and how to work for God.

Mons Casey in his panygeric said that life, like religion, is made up of mysteries. Philosophers, throughout the centuries, have tried to discover what life is. The quest continues but, for a Christian, life is centred on Christ.

For Sister Mary Camillus, this life began at her Baptism about eighty-eight years ago; it was nourished by the sacraments, by work and prayer in union with Christ.

On behalf of the priests, Sisters and girls, Monsignor offered sympathy to Sister's relatives, but more especially congratulated them for such a noble life lived for God.

Sister Camillus died in the Rest Home at Lochinvar on 11 February 1870 and was buried in the Sisters’ cemetery at Lochinvar on 12 February, 1970 after Requiem Mass which was celebrated by Rev Fr Dilley, Rev Fr Delaney and Rev Fr Hughes. Rt Rev Monsignor Casey presided on the sanctuary.

Besides the priests of the Diocese, the Sisters of St Joseph and the students of the College, many of Sister's nieces and nephews and friends were present.