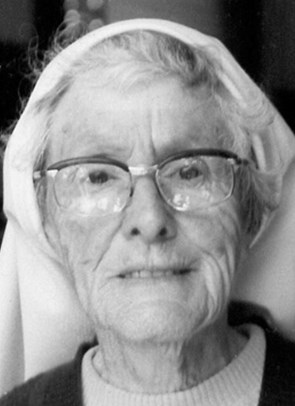 Sister Carmel, the third of the four children born to James Colgan and Mary Kearney, was born on 27 July 1898 at Beechwood and baptised Elizabeth. Her early schooling was at Hungerford State Primary School in the Wauchope area. Then she spent four years at the Sisters' small boarding school at Port Macquarie.  It was there that she came under the influence of Sister M. Dorothea for whom she had the greatest admiration and to whom she turned for advice when she felt the call to become a Sister of St Joseph. This she did at the age of twenty-one when she entered the Novitiate at Lochinvar on 11 February 1919.

Professed as Sr M Carmel of Our Lady of Lourdes, on 28 June 1921 she began her teaching career in the Primary School at Carrington. Over the years she taught also at Merewether, Charlestown, Lochinvar, Taree, Cessnock, Summer Hill, Morisset, Clifton Gardens and Swansea.  Sister Carmel was always a zealous, conscientious teacher. She loved her class, and her classroom.  Each child was important to her and she tried to infuse into her pupils the same enthusiasm for their work that she herself had. Her motto was: ‘If anything is worth doing, it is worth doing well‘.  She even made the children repeat this after her and encouraged them to make it their motto.

When forced to retire because of age and failing eyesight, she lived for some years at Gateshead and Windale before returning to Lochinvar and eventually becoming a resident in our Nursing Home.  When she came to Lochinvar she still wanted to do something so used to take a broom and sweep the paths.  When finally she entered the Nursing Home, the first of her possessions to go with her was the  small broom that had been bought especially for her and it went under her bed for safety.

Carmel was always quick-witted, very generous, warm-hearted and hospitable. She was always down to earth and practical and evidently used the same matter-of-fact approach to God. She said to one of her friends in the early days, "You don't have to make long visits; just go in and say to the Lord what you have to say and then get out."  The "get out" suggested that you get on with the job for Him.

When asked about their memories of Sister Carmel, the response was invariably a smile.  That in itself said something very powerfully about her life and personality. Her wit, good humour, love of fun were characteristics that stand out in the minds of all who knew her. Carmel was simple and unassuming, never demanding attention even when ill and she was grateful to any that was given.

In summing up Sr Carmel’s life one is reminded of St Paul's words to the Romans; “Never flag in zeal. Be aglow with the spirit, serve the Lord“.

From Words of Remembrance by Sr Margaret Connell