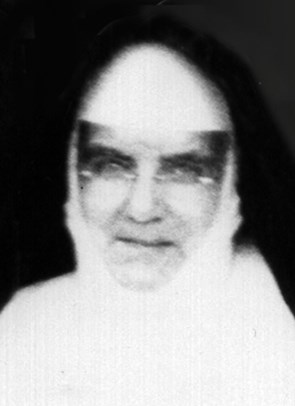 Sabina Barry, born on 10 July 1864 at West Maitland, was the first daughter of Michael and Mary Barry (née Cotter) to enter at Lochinvar; two of her sisters followed her, Sr Dominic (Elizabeth) and Sr Ursula (Catherine).

Sabina became a postulant on 19th March, 1885, taking the name Sister Mary Catherine of Our Lady of Lourdes, and was Received on the 15th August, 1885 with Srs. Stanislaus Tobin and Xavier Mclnerney.

Sr Catherine was one of our very early Sisters.  Her apostolic work began on 14th May, 1886 when, with Sr. Mary Evangelist, she opened the new school at Knockfin. In August of that year she made her first Profession. Sister was located at Lochinvar till January 1888 when she moved to Merriwa where she remained till she became Sister Assistant in June 1893, appointed by Sr. Mary Hyacinth the newly appointed Sister Guardian. Her term as Sister Assistant was one of constant activity with much visiting of branch convents and work in the mother house. Severe illness struck her in May, 1895 and a Lewisham Sister came to nurse her.

Sister Mary Catherine Barry is, perhaps, best remembered in the Congregation for her years as Mistress of Novices. It is written of her:

"Hers became the task of training the young members of the institute, who were entering the order in the ways of religious life, giving them a deep and lasting grip on religious observances. In this office she was firm but kind, and her own love of the Blessed Sacrament and her devotion to her daily visit became the characteristic by which her novices knew her best."

After twelve years as Mistress of Novices, Mother Mary Catherine spent some years as superior and teacher of music in branch houses. She was twice superior of Kurri Kurri and Burwood as well as terms at Brookfield before resuming the training of young sisters in 1923.

After relinquishing her task as Novice Mistress in 1929, Mother Catherine remained at Lochinvar in semi-retirement still 'filling in' when needed and acting as companion for Sisters when going out. As time went on she spent more time in the presence of the Blessed Sacrament, praying quietly with her meditation books in the front seat of the chapel. She celebrated her Golden Jubilee of Profession on the 2nd September, 1936 with Sisters Mary Xavier, Francis Mary and Josepha.

Sister's health gradually declined and she was eventually admitted to the Infirmary where she died after a long illness on the 16th September, 1938. She was buried in the Lochinvar Cemetery at 9.30am on the 17th. The Office of the Dead and Requiem were offered on the 20th September, 1938 for the repose of her soul and that of her sister, Sister Mary Dominic who had predeceased her by two weeks on 31 August 1938. In an account of her death we find:

"She was one of the pillars of the Institute, having filled during her life many important posts ... on such pillars of prayer, dedication and loyalty the institute has been built and sustained."

Taken from The Sentinel