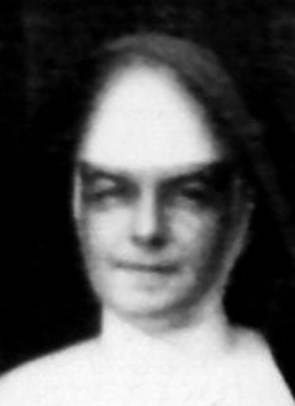 Kathleen Heagney was born on 10 December 1899 into a strong Catholic family which was known by all who knew Lochinvar for its strong faith, devotion to the Church and example of a good Catholic home. Her parents were Francis Heagney and Mary Ryan. It was no wonder that God called one of the family to serve in the congregation of the Sisters of St Joseph.

Kathleen Heagney entered on 19 June 1919 taking the name of Sister Mary Cecilia of the Precious Blood and was professed on 5 January 1922. She laboured in many parishes, ministering in Merriwa, Kurri Kurri, Dungog, The Junction, Clifton Gardens, Summer Hill, Largs, Taree, Cessnock and Lochinvar where she inspired her pupils with high ideals together with her love of music.

Hers was the Apostolate of suffering, but in spite of failing health she persevered in her work almost to the end. In her years of carrying out her Apostolate one of the roles given her was that of Junior Boarders' Mistress which she held for six or seven years. Sister Mary Cecilia went to her reward with a threefold claim: she had worked diligently, suffered patiently and prayed fervently.

Sister Mary Cecilia Heagney died on 9 June, 1970 and her Requiem Mass for the repose of her soul was celebrated in the Convent Chapel, Lochinvar on 10 June. Rev Fr Dilley, Parish Priest of Lochinvar, celebrated the Mass. Monsignor Forde presided and preached the Panegyric.

Excerpts taken from the Panegyric