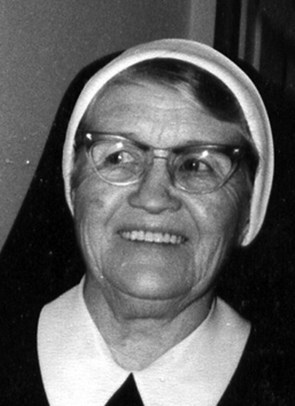 Catherine Aloysius Markham was born at Segenhoe near Scone on 13 March 1904, the seventh child of Martin Markham and Catherine Connolly. Her father died when she was three years old.  At that time Peter, the eldest was fourteen and the youngest, Martin was born six months after his father’s death.

The Markham family had a long association with Lochinvar as Catherine’s mother was enrolled at the school on 3 September 1883, the day the founding Sisters opened the school.  Four generations of Markhams have been educated in Lochinvar and twenty-seven relatives are buried in the cemetery.

Catherine entered the Novitiate at Lochinvar on 11 February 1928 and was given the name, Sister Mary Christina.  After her profession as a Sister of St Joseph on 2 July 1930 she was appointed to Cessnock. Then appointments followed in Charlestown, Lochinvar, Merriwa, Carrington, Cardiff, West Wallsend, Kendall, Abermain, Taree, Merewether and Shortland.  She ministered as a teacher and as school principal and in many places she was also the superior of the convent.  A most prayerful person, her kindness and compassion made an impression on the many people she touched during her long life.

Sister spent her last years in the Nursing Home at Lochinvar where she died, aged eighty-nine at 7.40 on the morning of 14 April 1993 in the presence of ten Sisters.  After her sister, Imelda had died in 1989 she longed to be with God and her family as her six brothers and two sisters had already gone before her in faith.

After the celebration of her Funeral Mass in the convent chapel on 16 April Sister M Christina was buried in the Sisters’ section of the Lochinvar cemetery among her many Markham relatives.

Taken from the Words of Remembrance given by niece, Sr Carmela Markham