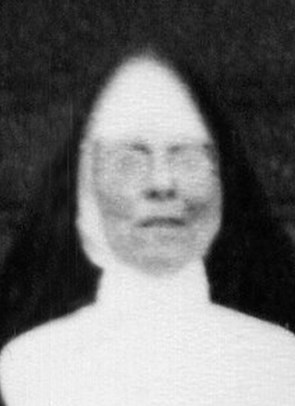 Mary Heagney was the youngest of the three children of Patrick and Mary Heagney who were among the earliest settlers of the Lochinvar district. She had a sister who became Sister M. Elizabeth, O.P. and a brother, Francis.

Mary received her early education at the Lochinvar Public School. When of age to take up higher studies she was sent to the boarding school run by the Dominican Nuns in Maitland. The school had been established a few years before in 1867.

"At the age of twenty she was one of the grand procession of Lochinvar residents who proceeded to the top of Black Hill to meet another procession led by the late Most Rev. Dr. Murray, then Bishop of Maitland, accompanying the four first pioneer Sisters of St. Joseph who that day took up residence in a humble cottage near the Lochinvar bridge. Mary Heagney was chosen to read the address of welcome from the warm-hearted and enthusiastic people of Lochinvar. A few years later she was one of the first members of the institute, entering in 1888.

"Sister M. Columba during her long religious life filled many important posts in her order and was the Local Superior of many branch convents. She retired from administrative work and teaching in 1941 but was never idle. Her fingers were always busy with some useful occupation or she was exchanging letters with absent Sisters, relatives and friends or enjoying a good book or the reliable chronicle of important world happenings in which her interest never flagged. She was possessed of all her faculties, and retained her splendid memory to the end.

“In her ninety-first year of life and the sixty-third year of her religious profession, Sister Mary Columba Heagney passed away peacefully at the Mother House, Lochinvar, on 9th April 1953, after a brief illness.

"At the Solemn Office and Requiem Mass in the Convent Chapel on the 10th April, the Right Rev. Mgr. Peters, V.G., P.P. presided. Celebrant of the Mass was the Rev. Father Lewandowski, with the Revs. M. Farrelly deacon, P. Hanrahan sub-deacon and the Very Rev. H. Ward, M.C. The cantors were the Revs. J. Lavery and D. Gooud. A choir of over thirty priests was present besides the Religious Community and relatives and friends.

"Before the last absolution in the Chapel, Rt. Rev. Mgr. Peters in his panegyric warmly praised the life of the late Sister M. Columba, her pioneering work and the splendid family from which she came, making special mention of her brother, the late Mr. Francis Heagney whose death a few years before robbed the parish and district of such an exemplary Catholic and citizen."

Sister Mary Columba is buried in the Sisters’ section of the Lochinvar cemetery.

Report of the Maitland "Sentinel"