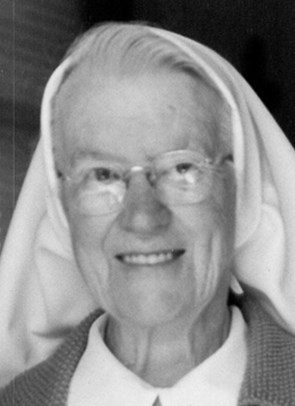 Jessie Veronica Moylan was born on 1 May, 1902, at Kolodong, near Taree to John Moylan and Anne Catherine Steinmetz. She lived at home, helping on the family farm until she entered religious life at Lochinvar on 23 January, 1923.

She was professed as Sister Mary Cyril of St Joseph on 2 July, 1925, and immediately began her apostolic life of over fifty years of teaching.

Sr Cyril was an Infants' Teacher and taught in Charlestown, Abermain, Carrington, Wauchope, West Wallsend, Gloucester, Cundletown, Gloucester, Aberdeen, Denman and Dungog. In 1977 Sister M Cyril retired from teaching but still continued to live and work in other parishes of the diocese until she retired to the Nursing Home in 1986.

Sister M Cyril was devoted in the very best sense of commitment, interest and fidelity to the faith, to the Congregation, to her family, community, students and friends. In terms of faith she was a woman of prayer. Even in holidays when, in the old days, timetables were relaxed, you could set your clock by her habits of prayer.

Within the Congregation she was full of energy, organising the buildings such as the Cundletown Convent and Boarding School and the Aberdeen College and the swimming pool. She put her considerable artistic gifts generously to work to produce what she called “works of art in stitchery" for the Convent and School fetes in the days when these events were one of our major sources of revenue.  Those who knew Sr Cyril would agree she seldom had an idle moment.

Sister Cyril was a beautifully balanced person, complementing her work and prayer with a love of physical exercise: swimming, tennis and walking which she encouraged in her students. Many of these students would attest to her originality and skills as a teacher. As an infants' teacher she prepared hundreds of children for the sacraments and through the children had incalculable influence on their parents.

Sister Cyril was a sterling friend characterised by her genuineness, her honesty, her kindness, her sense of humour and her warm, vibrant humanity. Her tremendous love for the land was one of the great characteristics of her life.

Sister Cyril died peacefully in the Nursing Home at Lochinvar on 9 December 1989 and is buried in the Sisters’ Cemetery there.