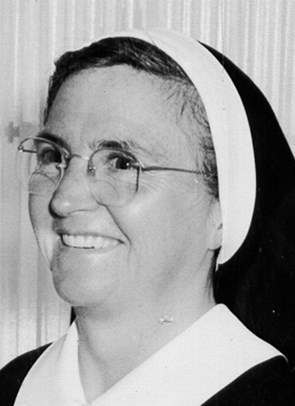 Alma Maud Ayres was born in Singleton on 2 September 1917 and was the eighth of nine children of John Ayres and Eva Maud Baxter. They lived on the home farm ten miles out of Denman where Alma lived, till she entered the Lochinvar Novitiate. Her primary education was at the State School near her home before going to Lochinvar for her Secondary schooling. She was a boarder from 1932 to 1935. Before she entered the Novitiate Alma taught in a subsidised State school near Barrington Tops for one year.

Sister taught in many schools in both the Maitland and Lismore Dioceses: Cundletown, Lochinvar, Merriwa, Aberdeen, Gloucester, Krambach, Wauchope, Port Macquarie, Abermain, West Wallsend, Carrington, Edgeworth, Kendall,  Swansea, Kurri Kurri, Newcastle, Toronto, Merewether Beach, The Junction and Swansea.    In all these places she endeared herself to her pupils by her kindness, her gentleness and her generosity.

Carrington, where she worked for about sixteen years, was always her favourite place. There Sister was well known for her love and care of the sick, the aged and the shut-ins. Her kindness to the priests with whom she worked was legendary. Nothing was ever a trouble to her when they needed anything. She made friends everywhere - the gardeners at Connolly Park Carrington who grew beautiful roses were among her specials. Needless to say she was allowed to pick roses any time and she did. She was given the name of the Rose Raider!”

Sister Mary Denis had a great love for her family and her friends were many.  She was a great cook and her cakes were given freely to those in need. She was especially good to the Staff and guests at MacKillop House for the years she was at Carrington. With her very deft and clever fingers she delighted many with her magnificent Irish crochet work. When she finally retired to Swansea the crochet hook was rarely out of her hands. For many years she had a “Bread Run” and took bread to anyone in need, and so got to know many people.  Rain, hail or shine the bread was delivered. In this, and in numerous other ways, Sister forged a strong link between the Anglican and Catholic communities at Carrington.

Sister Mary Denis died on Good Friday, 18 April 2003 after a long life of service. She was buried in the Sisters’ section of the Lochinvar cemetery.