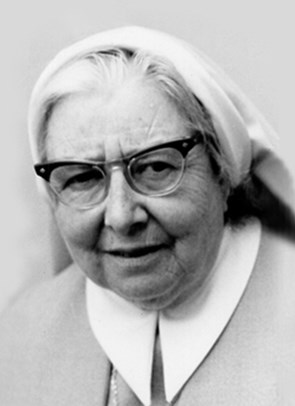 Sister Mary Emmanuel was born Margaret Eva Lewis on 16 August 1905 to Ernest John Lewis and Ada Rosanna Crouch in Helensburgh, a town situated between Sydney and Wollongong. She had two sisters, Phil and Mary whom she loved dearly and whose untimely deaths grieved her greatly.

Eva, as she was called in the family, was educated by the Brown Josephite Sisters in Helensburgh and then graduated from the Southern Cross Business College before moving with the family to Cessnock. There she worked for a legal firm and then in a motor business. She was very proud of her working experience and of the fact that she had a driver’s licence in the early l930's.

At almost twenty-seven, Eva entered the Novitiate of the Sisters of St Joseph in Lochinvar on 2 July 1932, taking the religious name of Sister Mary Emmanuel of the Sacred Heart.  She was professed on 24 January 1935.  For the first thirty years of her professed life, Sr Emmanuel worked in only three places: Port Macquarie (twice), Taree for just four years and Merriwa.  Sisters, pupils, parishioners and acquaintances from those places became life-long and very dear friends of hers.  Sister wrote of her first mission in Port Macquarie and gave us some insight into the indomitable pioneering spirit that characterised vocations in her generation, "Poverty and inconvenience were constant companions. In those days, Port was merely a fishing village. I taught Kinders, First and Second classes in the morning, secondary school in the afternoon, and private pupils after school."  Her apostolate in Port Macquarie was cut short by a life-threatening illness.

When she began to recover due, to the care given her especially by Dr Gardner and Sr Carmel Mary, she was sent in 1951 to the drier climate of Merriwa. As with her pupils in Port, a whole generation of Merriwa Catholics remember not only the happy days spent in her classroom, (tough though she was on them at times) but also the way she shared their joys and concerns, both then and throughout their lives. She became something of an institution in Merriwa: everyone loved Sister Emmanuel who used to return to them year after year while others came and went.

After she left Merriwa in 1965 Emmanuel spent a year or two in Lochinvar, Port Macquarie, Taree, Merriwa, Morisset, Cardiff, Summer Hill, West Wallsend, Windale and Clifton Gardens before she was stopped again by a massive heart attack. From 1973 on her vocation of service had to find expression in other ways, not least of which was keeping in contact with a wide range of people through her typed messages of friendship, support, sympathy or advice which she was never slow to give.  In Lochinvar she was a familiar sight, working in the garden which she loved. With her declining health, came a declining ability to say all she wanted to say, and even to type what she wanted to type.

The end came for Sister Mary Emmanuel when she was admitted to the Maitland Hospital just over a day before her death.  She died there as a result of a stroke on 21 April 1997. After the celebration of her Funeral Mass she was laid to rest in the Sisters’ section of the Lochinvar cemetery after a long life of almost ninety-two years.

Based on Words of Remembrance given by Patricia Egan rsj