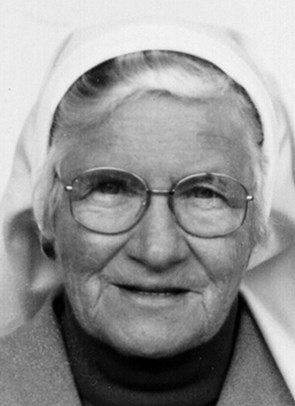 Alice Mary Crump was the eldest of seven children born on 12 June 1910 at Wollombi to Michael John Crump and Ethel Jessie Rafter. At the time of her death she was survived by siblings, Laurie, Lucy and Reta, her brothers Jim, Steve and Joe, having predeceased her.

The Crumps from Narone Creek near Wollombi were “a happy, united, hospitable family, concerned for their neighbours and full of faith.” The children attended the local state primary school at Wollombi, travelling the four miles each way on horseback or by buggy. Initially Alice rode the quiet, gentle “Taffy” but later left it to the boys and rode a horse which was “too wild for the others.” She was recognised as a great horsewoman even at primary school age. Twice a week, before school, she rode an extra mile for a piano lesson taught by the wife of the local butcher.

Having concluded primary schooling Alice was faced with continuing her education at St Joseph’s College here at Lochinvar as a boarder. This she did for five years gaining her Leaving Certiﬁcate in 1929. The call to join the mission of the Josephite Sisters gradually became evident to Alice and after spending six months at Wollombi with her family, she joined the congregation on 27 June, 1930 becoming known as Sister Mary Ephrem of the Holy Spirit.

She was professed on 4 January 1933. Teaching was to be her ministry from 1933 until 1976 with one interruption due to her appointment as Congregational Bursar in May 1966 after the tragic death of Mother Mary Mechtilde on the highway. This office she carried out with great efficiency until the end of 1973. She then resumed teaching.

Sr Ephrem taught in primary schools, including terms of principalship at Dungog, Carrington and the Greta Camp school. Later, she did special correspondence courses in Maths, Commerce, History, Geography and Dressmaking to prepare for secondary teaching.

She taught in many schools in the Maitland diocese: The Junction, Taree, Wingham, Lochinvar, Cessnock (Mt St Joseph’s)  and beyond at Port Macquarie.

Sr Ephrem’s next ministry was to visit people in their homes and in hospitals, supporting the priest in parishes. She was appointed to Toronto in 1973-74. Her unconditional acceptance of all, her wide range of interests, her natural manner and her cheerfulness made her very suitable to this work.  She has the opportunity to do a spiritual renewal course in Wellington New Zealand in 1980.

From 1992-1999, Ephrem spent a more leisurely lifestyle at Tuncurry, Gateshead and Swansea. Due to failing health she moved to the Nursing Home at Lochinvar in October 1999 where she was cared for so lovingly by the committed staff.

On Friday night 16 February 2001 Sister Mary Ephrem died as gently and unobtrusively as she had lived.  She was buried in the Sisters’ Cemetery at Lochinvar.