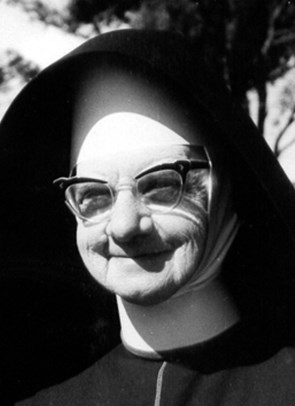 Mary Cain the daughter of Henry Cain and Isabel McDonald was born at Port Macquarie on April 11, 1894, one of ten children.

Mary entered the Novitiate at Lochinvar on 21 May 1914 and was given the name, Sr M Fabian of the Ascension.  She was professed on 5 July 1917 and thereafter began her ministry in the classroom teaching primary classes.

On 21 February, 1969 Sister M. Fabian died suddenly at St Joseph's Convent in Bulahdelah in her seventy-fifth year. Her remains were brought to Lochinvar for burial which took place after Solemn Office and Requiem Mass in the Convent Chapel on 22nd February.

A close friend of the Cain family, Monsignor J. Meaney P.P. celebrated the solemn Mass and Monsignor V. E. Casey P.P. and V.G. preached the panegyric. In this he spoke of Sister Fabian's gentle influence on the children she taught, of the love and friendship she spread in a truly Christian way. "She was welcome wherever she went", Monsignor said, "for her disposition made happiness for herself and for all those around her." This was particularly evident in her Apostolate in the classroom and in her influence on her pupils and their parents.