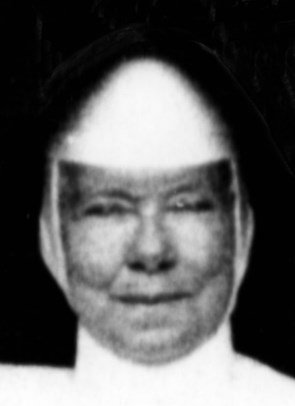 Mary Crowe was born in West Maitland on 30 May 1870 to William Crowe and Sabina (née Barry). She was the sister of Sisters Mary Bonaventure and Bertrand who had preceded her to the Lochinvar Novitiate. She had remained to care for her widowed mother and so allowed her younger sisters to enter.

When her beloved mother passed away, she, too, became a Sister of St Joseph entering Lochinvar in 1910 and receiving the name of Sister Mary Borgia. She spent thirty-nine years in the religious life to the edification of the whole Community. She ministered in Lochinvar teaching dressmaking in the High School.

Two months after suffering a stroke she died in the Infirmary at Lochinvar on Friday morning about 2 o'clock on 28 October 1949 surrounded by the Sisters. Solemn Office and Requiem was held on Saturday 29 October. Dr Gleeson CSsR, Bishop of Maitland and nineteen priests were present. The funeral took place immediately after at the Lochinvar Cemetery.

Sister Mary Borgia was the essence of gentleness and charity in thought, word and deed. In his panegyric, Most Rev. Dr. Gleeson said it seemed that God had rewarded her for this beautiful virtue by willing that her death should occur just before the beginning of the month of the Holy Souls, so that she would obtain abundant prayers for her eternal repose.