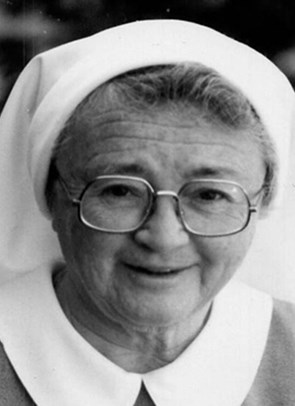 Cecilia Bradley was born in Smithtown on 6 September 1922, the second of seven children to John Bradley & Catherine Perry. She spent her childhood in the midst of a loving, musical and hard working family in Taree.  Celie, as she was known, always wanted to be a nun. Having completed her schooling in Taree, her teacher training in Sydney and her teacher’s bond she entered the Novitiate of the Sisters of St Joseph at Lochinvar on 1 January 1945 and was given the religious name of Sister Mary Gonzaga. She made her first Profession in 1947.

As a professed religious for just over forty-six years Sister Mary Gonzaga worked in the ministry of music teaching in fourteen schools and parishes across three dioceses: Sydney, Lismore and the length and breadth of the Maitland Diocese. Those places that benefited from her apostolate were Dungog, The Junction, Cardiff, Clifton Gardens, Belmont, Morisset, Abermain, Kendall, Denman, Cessnock, Wingham, Taree, Merriwa, Lochinvar and Wauchope.  Her skill and patience as a teacher were well recognised by her pupils, as was her unstinting generosity in sharing her time and talents. At one time a music examiner was heard to say: “Sister, your pupils are very fortunate to have you as a teacher”.

Due to ill health, at the end of 1992 Sister Gonzaga retired from teaching and moved to Wauchope.  At that time she had been in charge of St Cecelia's music centre at Lochinvar. With the love and support of the Sisters and of the parish community of Wauchope, she learned to slow down and relax thus regaining much of her health and vigour.

Sister Gonzaga was a special person in so many ways. She had deep faith. Her single-mindedness allowed for no duplicity or pretence and she presumed the same integrity in all she met. She was self effacing but humbly and graciously accepted the truth of any acknowledgement of her gifts. Her awareness of the needs, feelings and talents of others was evidence of her unselfishness and generosity.

In the last week of her life she visited Taree and renewed numerous acquaintances, recalling memories of people and events from her early years.  Sister seemed to be in good health as she displayed a great joy and keen interest in everyone. Instead of returning to Wauchope by train, as planned, she travelled by car with the Cundletown Sisters to visit Sister Colleen who was gravely ill  in Port Macquarie. In the grounds of the hospital she had a sick turn and was admitted for observation. Supported by her Sisters and the hospital staff, the stroke developed and in the afternoon having received the sacrament of the Anointing of the Sick she died on 14 August 1993. Typically, during the Anointing she thanked the priest with a handshake and removed the oxygen mask to speak her words of appreciation.

Sister Cecilia Bradley was laid to rest in the Sisters’ section of the Lochinvar cemetery after the celebration of her Funeral Mass in the convent chapel in the presence of a large congregation of Sisters, relatives, past pupils and friends.

Taken from the Words of Remembrance spoken by Sister Anita Conroy at a Memorial Mass for Sister Mary Gonzaga at Wauchope on 24th August, 1993.