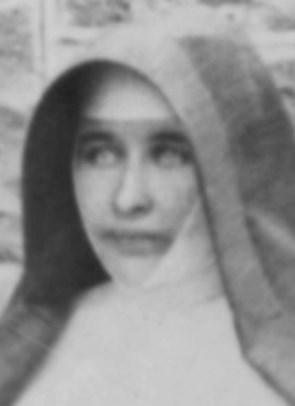 Sr M Imleda Flood was one of the four pioneer Sisters who came to Lochinvar from Perthville in September 1883.

Born Catherine Flood on 26 August 1862 to Thomas and Julia Flood (nee Cullen) of The Square, Barry Road, Blayney in New South Wales, she was the eldest of the six children.

At the age of eighteen Catherine entered the convent of the Sisters of St Joseph at The Vale, Perthville near Bathurst and was received on 4 July, 1881 taking the name Sr Mary Imelda of the Blessed Sacrament.

Her first Profession was made on the 6 January, 1883. Later that year she left The Vale as one of the four Sisters making a new foundation at Lochinvar where for a short time, she was known as Sr Mary Benedict. When the school at Lochinvar was opened on 3 September, 1883 Sister M Imelda was in charge of the Infants Classes.

In January, 1885 while still only in her twenty-fourth year, she with two novices, Srs Patrick Comerford and Evangelist Hyde founded the branch convent at Quirindi. She spent two and a half years there before being recalled to lead the Sisters making the foundation at Burwood in Newcastle in 1888.

Sr M Imelda was appointed Mistress of Novices in June 1889. In June of the following year, Sister Ambrose Joseph resigned as Sister Guardian and Sr Imelda was appointed Sister Guardian, an office she held for three years until 1893. During her term of office the brick convent at Lochinvar was planned and built. In addition she saw the congregation expand in numbers and into new convents in Knockfin and Krambach and eight Sisters were professed and thirteen postulants entered.

One of the most courageous achievements of Sister Imelda’s term as Sister Guardian was the initiation of a building program to provide an adequate and substantial Mother House for the Congregation.

At the conclusion of her term of office Sr M Imelda was once again appointed superior at Burwood and later at Largs. In 1897 she returned to work in the school at Lochinvar and on 3 July, 1899 was appointed Bursar by Mother M Evangelist. By the end of November she was too ill to carry on and was admitted to the Infirmary. Her mother came to visit her on 10 December and remained till 16th of that month on which day Sister received the Last Sacraments.

On the 6th January, the seventeenth anniversary of her Profession, Fr McCormack said Mass upstairs opposite the Infirmary door. Sr Imelda again received the Last Sacraments on 10 February.

Sr Mary Imelda Flood died of consumption at 7.30pm on Sunday, 18 February, 1900 aged thirty-seven. Solemn Office for the Dead and High Mass were offered in the Chapel on 20 February, followed by the funeral to the Lochinvar Catholic Cemetery where the burial took place.