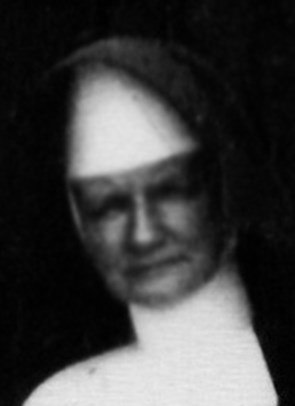 Winnifred McGregor, daughter of Philip McGregor and Brigid Flanagan of Parkville near Scone in the Upper Hunter was born on 13 April 1884, the youngest child of a family of nine. At the time of her death, she was survived by two sisters, Mother Mary La Merci (former Mother Superior of the Sisters of Mercy of Gunnedah) and Miss Margaret McGregor of Kingsford, Sydney as well as one brother, Mr J McGregor of Narrabri and a number of nieces, nephews and their children.

Winnifred received her early primary education with the Sisters of St Joseph at Wingen. Later she came to Lochinvar as a boarder and eventually entered the Congregation in 1903. She was named Sister Mary Imelda and made her first Profession as a Sister of St Joseph on 26 June 1905.

Over the years, Sister ministered in Largs, Cessnock, Kurri Kurri, Dungog, Krambach, Carrington, Merriwa, Cundletown, Denman and Lochinvar. Her work in the schools was excellent, characterised by that meticulous exactness which distinguished her every action. She was also a very good manager in domestic affairs. She was most generous and helpful in her instructions to converts when called upon for this spiritual charity. She loved the natural world.

On 7 March 1952 at St Joseph's Convent at Lochinvar Sister Mary Imelda McGregor died after a painful illness extending over several years and borne with heroic patience and resignation. Although the gradual approach of death had been evident for some time, the end came suddenly from heart failure. The Very Rev. Monsignor Thomas, Director of the Propagation of the Faith, visiting the sick in the convent infirmary, was called to Sister and while the last sacred rites were performed, she followed them in perfect consciousness until her last sigh.

The interment took place on Saturday, 8 March, in the convent enclosure of St Patrick's Cemetery in Lochinvar. The Rev. N. Withnell (Administrator at Maitland), officiated at the bier and at the graveside. The Children of Mary and Senior Students of the College formed a guard of honour as the casket was borne through the front quadrangle to the entrance gate. The pall-bearers were Sister’s nephews Messrs Paul, Philip, Kevin and Charles Mulhearn.

The Solemn Office and Requiem was sung at 10.30 on Tuesday, 12 March with His Lord­ship, Most Rev. J. Toohey, D.D., Coadjutor Bishop of Maitland, presiding. A choir of twenty-six priests chanted the Office, cantors being the Revs E Jordan (Stockton) and D M Heffernan (Mayfield). Celebrant of the Mass was the Rev. P. J. Flanagan from Broadmeadow, Sister Imelda’s cousin. Revs M. J. Hanrahan (Tarro) and V. Casey (Merriwa) were deacon and sub-deacon. The Rev. N. Withnell was Master of Ceremonies. Sister M. Imelda's family was represented by her sisters, Mother La Merci accompanied by Sisters Mary Agnes and de Pazzi from Inverell and Miss Margaret McGregor and by many nephews and nieces.

Before the final prayers at the catafalque, His Lordship, Dr. Toohey preached the panegyric, a touching tribute to the life of Sister Mary Imelda as a Sister of St. Joseph.

Based on the report from the Maitland Sentinel