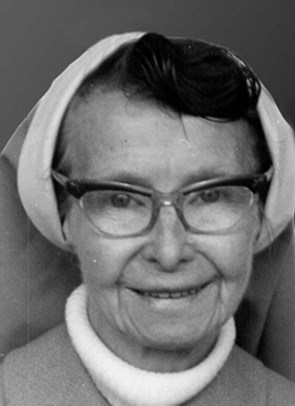 Julia Clare Moylan was born at Pine Brush near Dungog on 5 June 1904, the daughter and fifth child of Thomas Moylan and Mary Landers.  Her grandparents, Michael and Mary Moylan came from County Clare in Ireland, bought Pine Brush for two shillings and six pence an acre, cleared the forest, made furniture from cedar and farmed the land. Pine Brush remained very important to Sr Irenaeus who often spoke of it with pride and affection.

In her notes Sr Irenaeus recorded that her father, Thomas Moylan as a young man of eighteen, escorted the first Sisters to the Brookfield Convent by buggy from Clarence Town wharf. When Sr Magdalen McNamara died at Brookfield in 1918,  Thomas Moylan and six other Brookfield men kept vigil with Sister's coffin in the Dungog Church from 9.00 p.m. till train time at 1.00 a.m. on the night she died.

Julia's primary schooling was  at the Brookfield Convent school. She spoke highly of the Josephite Sisters who taught her there. When her father could afford it, he sent her to board at Lochinvar for Secondary School.

Julia entered the Novitiate at Lochinvar on 31 July 1923, as Sr M Irenaeus of Jesus and was the first postulant received in our present chapel.

After her Profession on 5 January, 1926, Sr Irenaeus went out to teach in the schools of the diocese. The places where she worked make a very long list. She was very interested in the well-being and advancement of the children she taught and worked very hard to make it possible for them to proceed to High School.

Her time at Largs in the 1930s has been called a golden era of education at Largs by one of her most successful ex-students. As one pupil put it,  "Not only was the cane a thing of the past but pleasure in learning became apparent. Largs Convent became a school where annually pupils won both State and Diocesan bursaries and pupils repeating Sixth Class were taught to expand their learning by working on their own. Over the years I have received letters from people whose total education was acquired at Largs Convent yet whose standards were far beyond those of primary schooling. We who were Sr Irenaeus' pupils can be grateful that we were in the hands of a great teacher and also that she was a humble, pleasant, caring woman whose example we could follow in all things.”

Outside the school, Sr Irenaeus showed great concern and kindness for the parents of the school children, spending time visiting homes to talk and listen to people and lend support in their bereavements and other distress.

Sr Irenaeus worked in the schools until the 1970s when she retired to Lochinvar. In 1985, because of failing health, she was given a place in the Nursing Home. There she was beautifully cared for during many years but she gradually weakened until Tuesday, 30 January when she died at midday, aged ninety-one years and seven months, the last of her family.

Taken from Words of Remembrance  by Sr Clare Burgess RSJ