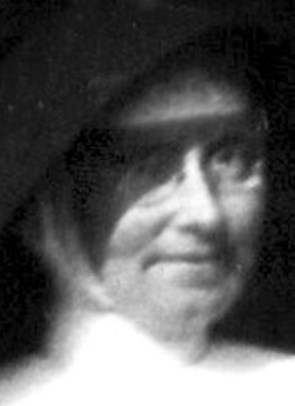 Mary Benedicta Treacy was born on 21 August 1886 in Merriwa, one of ten children of the late Thomas Treacy, a squatter and Anastasia Cronin of ‘Sunnyside’, Merriwa. She entered the Novitiate of the Sisters of St Joseph at Lochinvar on 17 April, 1910 and was given the name Sr M Jerome of the Patronage of St Joseph.

After her Profession on 30 January 1913 she taught music in a number of parishes: Burwood (The Junction), Aberdeen, Kurri Kurri, Cessnock, Taree, Merriwa and Belmont. For many years she was Boarder Mistress at Lochinvar.

A woman of deep faith, she endeared herself to many by her integrity of character, her spirit of prayer and her appreciation for the gift of life.  Her contribution to the community would be difficult to estimate. For those whose lives she touched, she was best remembered for the outstanding commitment to duty, her wonderful compassion for the needy, her sincerity and her delightful sense of humour.

Sister M Jerome retired at the age of eighty-four to the Nursing Home at Lochinvar and died there on 14 January 1991 at the grand age of one hundred and four years.  She was survived by many nieces and nephews including Sister Louise Marie and Sister Augustine (Elsie Krelle) of the Sisters of St Joseph of Lochinvar.

The Requiem Mass took place in the Convent Chapel at Lochinvar on 16 January and was celebrated by the relatives and friends of the deceased. At the time of her death Sister M Jerome was the oldest  Sister of the Congregation.  She was buried in the Sisters’ Section of the Lochinvar Cemetery.