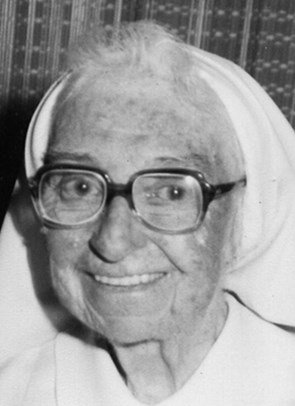 Margaret Agnes Blake was born at Adamstown on 23 September 1901 to Peter Blake and Isabella McLuckie. Her father worked as a blacksmith. After gaining her Leaving Certificate at St Joseph’s College in Lochinvar, she decided to become a schoolteacher.  She trained at Sydney Teachers College and taught in bush schools for three years before she entered the Novitiate at Lochinvar from her home in Greta on 23 January 1925, taking the name Sister Mary Joan. After her profession as a Sister of St Joseph on 6 July 1927, she began her ministry of education in the diocese of Maitland-Newcastle and in the Sydney Archdiocese as a secondary school teacher and later as a principal.

Her first appointment was to Wauchope.  Wingham, Lochinvar, The Junction (Merewether), Summer Hill, Belmont and Gateshead followed.  After forty-six years, her ministry of teaching ended at Lochinvar in 1976.  Sr Joan excelled in the fields of English literature and modern history.  In her own classes she brought alive the great events of history from the French Revolution to the Second World War.  She encouraged in her students a love of literature from Shakespeare to T.S. Elliot and from Marcus Clarke to Christopher Brennan.

Though small in stature, Sr Joan nevertheless had great dignity and presence and as one former pupil said, “She was both strict and kind and had a warm sense of humour. She exercised considerable authority over students without being authoritarian.”  In 1964, she became the first principal, on a staff of four Sisters, at St Mary’s Secondary School in Gateshead.

A woman of great faith, courage and commitment, Sr Joan had a great love for God and for her Sisters. In later years, her health declined and she lived a semi-retired life at Lochinvar from 1981, becoming a resident of the Nursing Home from 1983. There her life of service ended, after a long illness on 16 March 1991.  Following the celebration of her Funeral Mass in the convent chapel, Sr Joan was laid to rest in the Sisters’ section of the Lochinvar cemetery.

Based on the Words of Remembrance at her Funeral Mass