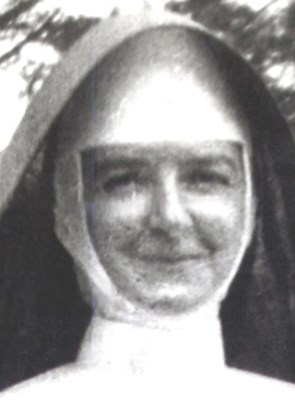 Emily Gallagher was born in Krambach on 3 November 1890 to hotel keeper, John Gallagher and Mary Moy. She entered the convent on 8 December 1912, taking the name of Sister Mary John of the Immaculate Conception. She was professed on 30 June 1915 and taught music in Lochinvar, Cundletown, West Wallsend, Kurri Kurri, Charlestown and Carrington.

“In the prime of life Sister Mary John received her call on 30 June 1943. For some months in indifferent health, she grew gradually worse in spite of every care and the best medical attention. Just before Christmas her Superiors insisted that she rest from teaching (she had insisted on continuing her music lessons); but still there was no improvement. For some time prior to her death she was in the kindly hands of the Mercy Sisters at the Mater Hospital Waratah, where she passed peacefully away, perfectly conscious and having bade farewell to her brothers the evening before. Sister Mary John had endeared herself to all who had the privilege of knowing her and had won laurels for her many pupils who keenly feel her loss. Sister M. Alacoque, her sister, is left to mourn her loss. (Taken from Lochinvar Magazine)

Her remains were brought to Lochinvar and a Solemn Office and Requiem were celebrated on I July. Her brother, Father Gallagher and her Sister, Sister Mary Alacoque were present as were several members of her family. Very Reverend Monsignor Peters presided. Sister Mary John Gallagher was laid to rest in the Sisters’ section of the Lochinvar cemetery.