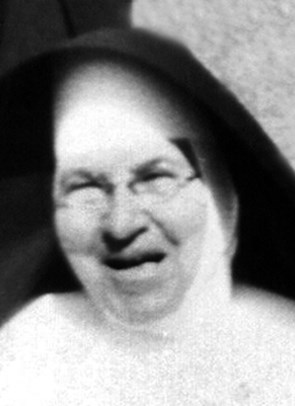 Ellen Comerford was born in Waratah on 17 March 1869 to James Comerford and Mary Phelan.  She was the seventh of their eight children: James, Catherine, Patrick, John, Michael, Mary, Ellen and Elizabeth.

She was one of the very earliest Sisters, having entered at Lochinvar at the age of fifteen on 8 June 1884, three months after her older sister, Mary (Sr M Patrick). She was given the name Sr M Alphonsus Josepha of the Immaculate Heart of Mary, but she became known as Sr M Josepha.

She was professed on 4 July 1886.  From then till a few weeks before her death, she taught in the schools of the diocese at Lochinvar, Merriwa, Carrington, Burwood, Brookfield, Dungog, Wingen, Aberdeen, Cessnock, Cardiff and Krambach, having served in many of those places more than once and been in charge of most of the schools.

Sr Josepha was a 'cheerful giver,' ready to face great difficulties with a smile. Her unfailing cheerfulness and kindness caused her to be esteemed and loved by all, wherever she dwelt and her fifty years of joyous labour were not without the recompense of the 'hundredfold even in this life.'

Sister was in charge of the Krambach School in 1944 and when it closed for the Christmas vacation, she went to the Mater Misericordiae Hospital in Waratah for treatment. Her illness was found incurable and after a serious operation on Friday 12 January her condition deteriorated.  Two Sisters of the Congregation kept watch from Saturday night and were with her when she passed away on Tuesday 16 January, 1945.

Her remains were brought to Lochinvar on Tuesday evening and solemn Office and Requiem were held on Wednesday morning at 10.00.  His Lordship the Bishop of Maitland, Most Rev Dr Gleeson CSsR presided with a choir of thirty-two priests.

Sister Mary Josepha is buried in the Sisters’ cemetery at Lochinvar.