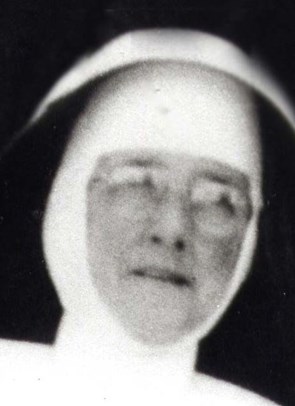 Adelaide Ireland, known in religion as Sister Mary Julian, was born in Launceston in Tasmania on February 7, 1884. Her father was Samuel Ireland and her mother Teresa Farrell. These good parents encouraged Adelaide early in the practice of deep faith and piety and it was not surprising that, as she grew older she evinced a desire to give herself to God in religion.

At the age of eighteen in 1902 she entered the congregation of the Sisters of St Joseph in Creswick in Victoria, was given the name, Sister Mary Julian, was received on 17 January 1903, professed 24 December 1904 and took perpetual vows on 3 April 1913.

She was one of the seven Sisters who came from the parishes of Creswick and Dunolly in the Ballarat Diocese to the Lochinvar congregation. Due to a number of factors including much ill health among the Sisters, unreliable financial resources and a declining population with the end of the gold rush, the Sisters made the decision to leave Victoria. With the approval of the Bishop of Ballarat, the Sisters wrote to the Sister Guardian of the Sisters of St Joseph of Lochinvar in June 1914 for membership of the congregation. The Sister Guardian, Mother Mary Evangelist agreed to their request. Sister Julian with her companions arrived in Lochinvar on 23 December 1914 and renewed their vows at Lochinvar in the presence of Rt Rev Dr Dwyer, Bishop of Maitland on 19 January 1915.

Sr Mary Julian entered upon a long apostolate of teaching infant classes in the various schools of the Maitland Diocese to which she was appointed. She worked in Merewether, Taree, Cessnock and Lochinvar but the greatest period of her activity was in Merewether.

Hers was the privilege for over sixty years of preparing young children for their first Holy Communion. Many past pupils of Sister Julian recalled with deep gratitude the debt they owed her for their formation in the faith. Sister's apostolic zeal was not confined to the children, for she had a special interest also in the instruction of converts to the faith. Not only individuals but in some cases whole families were brought to the faith.

The solemn office and Requiem were celebrated in St Joseph's Chapel, Lochinvar on Thursday, 21 April. Right Rev. Monsignor Forde presided in the absence of the Bishop and a choir of thirty-five priests chanted the Divine Office. Monsignor thanked God for graces given to the Diocese through the instrumentality of Sister Mary Julian's Apostolate.

Immediately after the Mass the interment took place in the Lochinvar cemetery. The pall-bearers were Messrs. T. Shannon, E. Burgess, R. Barry and G. Knipe.