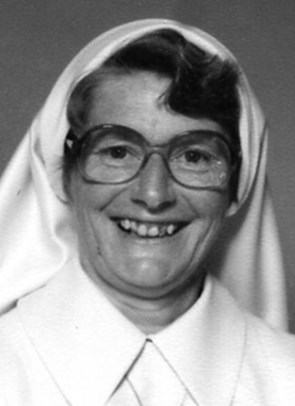 Jill Zena was baptised shortly after her birth in Merewether on 17th May, 1931. Her parents, David Lindsay Bulkeley Gavin and Ursula Amelda Barrett, had two other daughters, Robin and Challis (who died tragically with two of her children in a fire) and two sons, Lindsay and John.

Jill did her schooling from First Class to Intermediate Certiﬁcate at St Joseph’s Merewether. After leaving school she completed a Business Course and was a Shorthand/Typist for some time at McLeod, Kelso and Lee, car distributors.

On 1st July, 1949 she entered the Novitiate at Lochinvar and was given the name Sr M Juliana of the Precious Blood. After Profession on 2 January 1952 she began teaching in Primary Schools at Taree then Port Macquarie. When she moved to Abermain her work was in the Infants classes. From Abermain she went to Swansea, Taree, Morisset, Dungog, Charlestown, Summer Hill, Muswellbrook and Belmont. In the latter, Belmont she was Superior and Deputy Principal. She was next appointed to Summer Hill and then to Port Macquarie as Superior and Senior Primary teacher in both places.

Sister Mary Juliana was a very conscientious person, an excellent teacher who encouraged the children to produce the best work they could. Sister was very particular about the living of her Religious Life and led a prayerful life. Her great love of God was reflected in the care and work she put in to preparing classes for First Communion.

On withdrawing from teaching in 1984 Sister M. Juliana worked as a resource teacher. In 1989 she went to Carrington as pastoral worker which she did with the same earnestness that had characterised her whole life's work. She endeared herself to the people of Carrington.

In 1993 Sister was diagnosed with terminal cancer and underwent surgery but did not recover.  On 19th January, 1994 Sister Mary Juliana died in the Lochinvar Nursing Home after months of suffering.

A solemn Requiem was celebrated in the Convent Chapel and the burial took place in the Lochinvar Cemetery.