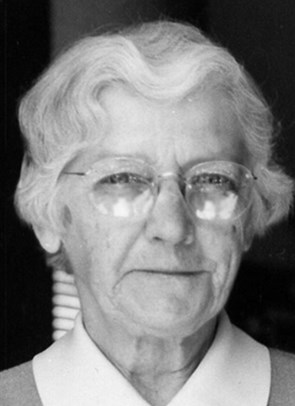 Kathleen Rose Doherty was born in Millers Forest near Raymond Terrace on 4 September 1912, the youngest of twelve children of Philip Joseph Doherty and Elizabeth Anne Noonan. Growing up in a large, happy family she developed the warmth and grace that were to become so characteristic of her throughout her long life. Young Kit as she was known in the family was educated to intermediate level at St Patrick’s School, Millers Forest.

On 22 April 1931, in pouring rain Kit Doherty entered the Novitiate at Lochinvar, on very night the family home at Millers Forest was flooded.  She was given the name of Sister Mary Kieran and was professed as a Sister of St Joseph on 3 January I934.  After completing her Novitiate, the Leaving Certiﬁcate and her teacher training she was appointed to Wingham when the convent was first opened in I935.

For the next forty-six years Sister Mary Kieran taught upper primary classes and left her influence for good in the parish and school communities of Kurri Kurri, Carrington, Krambach, Cessnock, Merriwa, Aberdeen, Wauchope, Shortland and Lochinvar as well as Lyneham and the Josephite Federation School at  Page in the ACT.  An excellent teacher, her leadership and administrative abilities were recognised early in her teaching life because in most of those places she was school principal and/or superior of the community.

After retiring from teaching in 1981 when the Wingham convent closed, Sister Kieran returned to Lochinvar to take on a new role as pastoral carer in the Nursing Home where for the last sixteen years of her life she served generously and lovingly both the residents and staff in whatever ways she could.

Sister Kieran’s long life came to its tragic end on 6 August 1998. The evening was dark and the rain was heavy when she when struck down while crossing the New England Highway at Lochinvar to celebrate Mass on the feast of the Transfiguration. Fiercely independent, she had refused the offer of a car trip to Mass that evening.  After the celebration of her Funeral Mass she was laid to rest in the Sisters’ section of the Lochinvar cemetery.