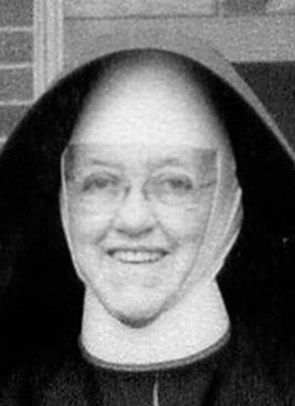 Annie Ethel Lovegrove was born on 20 July 1885 at Borambil near Cassilis, one of the twelve children of Ambrose Lovegrove and Sarah Regan. She enjoyed the close homelife that was customary in those days. In this happy circle the family Rosary was recited each night and although there was no Catholic School to attend the children "learned their strong Catholic piety in the home where they were brought up to know, love and serve God".

Annie entered the Novitiate at St Joseph’s Lochinvar on 10 March 1909 and was given the name Sr M Laurence of the Holy Rosary.  After profession on 7 February 1912 she served God in many convents in the Diocese and beyond - Largs, Dungog, Port Macquarie, Carrington, Gloucester, Brookfield, Wauchope, Carrington, Kurri Kurri, Bulahdelah, Gresford and West Wallsend - where she became well known and well loved. Though some might say that religious life separates a religious from her family, it served only to bring Sister closer to hers.

After fifty-nine years as a Sister of St. Joseph, Sr Laurence died in the Mater Misericordiae Hospital, Waratah on 11th December, 1968.

Her nephew, Father Roland Smythe P.P. of Shortland, celebrated the Requiem Mass at which His Lordship, Bishop Toohey presided.   The interment took place after the Mass in the Lochinvar cemetery

From The Lochinvar Magazine