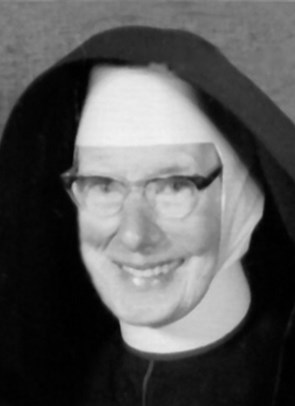 Sister Mary Leonard, daughter of Thomas and Anna Maria Bryant, was born in Marrickville on the 30 March, 1890, and baptised Annie Hildegarde.   Called affectionately "Gardie" by her family, she guarded the heritage received within her family, staunch Catholics and undaunted individualists. Gardie grew up first in Newtown and then on the Dorrigo farm where ‘Da’ had moved to be a gentleman farmer.

As priest's housekeeper at Port Macquarie she met Sisters of St Joseph for the first time and on the 24 May 1915 as the world was plunging into war, she entered the novitiate at Lochinvar and was professed as Sr M Leonard of Our Lady Help of Christians on 2 January 1918.

Small as a bird but wiry with a smile that took up half her face, stories abound of Sr Leonard.  She spent fifty years teaching Infants classes in Cundletown (twice), Dungog,  Aberdeen, Brookfield, Dungog, Wingen, Abermain, West Wallsend, Charlestown (twice), Taree, Cessnock, Charlestown, Wauchope and again at West Wallsend for her last appointment.  She prepared blackboards beautifully, her artistry was a household word.

Sr Leonard often painted backdrops for College concerts at Lochinvar with Sr Jane Frances, wielding brooms to reach the topmost leaves of the trees. She would cause roses to bloom on delicate silk and satin curtains to hang inside the tabernacle or cover the ciborium or monstrance. Loss of sight was the cross she was eventually asked to bear when she came to the Nursing Home at Lochinvar in 1970.

Then began eight years in darkness, a darkness brightened by a living faith and a wonderful sense of gratitude. No one could forget how she would pray aloud for those she loved and clap her hands with joy and say: "Wasn't that loverly."   Prayer became the air she breathed. All knew that the Holy Spirit was coming to fill the heart which he had made: "M_A_D_E - made" and indeed he did. Jesus, Mary and Joseph were with her or if not, it was only because Mary was out washing up or Jesus was playing in Joseph's workshop. Joseph would be given difficult tasks like doing "something about the rain so the sisters could get their clothes dry" and if Jesus did not seem to be answering fast enough he’d be told to get his mother.

It is a poor Congregation that cannot boast of at least one eccentric and the death of Sr Leonard diminished the Congregation's store of one of its outstanding and loved practitioners.  Julian Tension Woods, somewhat an eccentric himself, would have rejoiced to welcome to heaven this little one who had found her way home after almost ninety-eight years on 17 September 1978. After the celebration of her Funeral Mass in the convent chapel she was laid to rest in the Sisters' section of the Lochinvar cemetery.

Based on Words of Remembrance by  Sister Ellen Royan