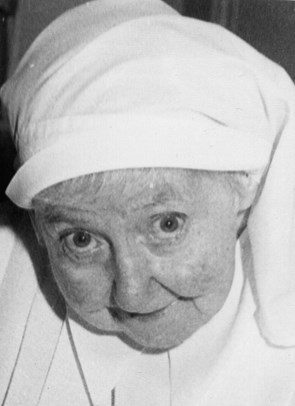 On January 23, 1922 she entered St. Joseph's Convent, Lochinvar, taking the name in religion as Sister Mary Louis of Our Lady of Perpetual Succour. Sister M. Louis was professed on July 7, 1924, and following her profession on 3 July 1924, she began her apostolate of teaching and over the years taught in the schools at Abermain, Cessnock, Charlestown, Wauchope, Merriwa, Kurri Kurri, Gloucester, Newcastle, Cardiff, Windale, Wingham and Lochinvar

Sister Mary Louis came from a family of very deep faith and this was reflected throughout her whole religious life in her prayerfulness, her devotion to the Mass, and her love of the Mother of God, particularly under the title she had chosen, as Our Lady of Perpetual Succour. She was known for her cheerfulness; her wit and humour brightened the many communities she lived in.

Eventually ill-health forced her to give up her work in the school, and for the last eight years of her life Sister was cared for in the Nursing Home at Lochinvar. She became progressively crippled with arthritis, and in her last years was confined to a wheel chair.

On 14 May 1984 Sister Mary Louis died quietly and peacefully at 8.00am with the Sisters including her own sister, Sister Mary Mel around her.