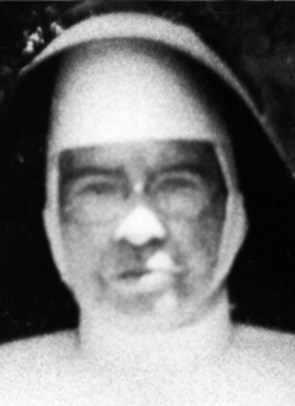 Mary Lucy Doran, a native of Muswellbrook was born on 16 March 1876 to Patrick Doran and Ellen Cleary. Patrick was a railway porter and a member of a well-known family which gave to Catholic Society such characters as Archdeacon Doran of Canowindra and Mr Teddy Doran who was well-known as the Director of Railways and a prominent figure in Catholic life.

Mary entered the Novitiate at Lochinvar on 1 October 1899 and was professed on 7 July 1902 as Sister M Lucy. She spent most of her life in the branch house convents of Dungog, Krambach, Wybong, Burwood Carrington, Glendonbrook, Aberdeen, Cundletown, Abermain, West Wallsend and Gloucester, leading the hidden life which brought its own reward. For about two years before her death, she was stationed at Lochinvar. She made many friends during her life of sixty-eight years.

Sr Lucy died in the Infirmary at Lochinvar on 30th March, 1944, after a long and painful illness, through which she was tenderly nursed by her Sisters in community. A Solemn Office and Requiem were held on 31 March where His Lordship, Most Rev Dr Gleeson CSsR presided. The interment took place in the Lochinvar cemetery immediately after Mass.