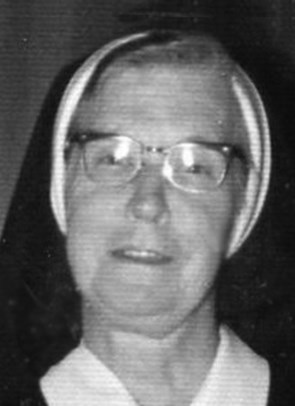 Phyllis Bambach was born at Broadmeadow on 22 April, 1907 and lived in Newcastle, Broadmeadow, Hamilton, and Cardiff respectively. Her father, Walter James Bambach was a carpenter and her mother was Mary Maud Flanagan. Phyllis had one brother, Kevin and a sister, Mrs Atwood.

Her schooling began with the Sisters of Mercy at Hamilton in classes one and second, then with the Dominicans at Star of the Sea at Newcastle and the Sisters of St Joseph at Cardiff for fifth and sixth classes. Phyllis left school when she was fourteen and worked as a shop assistant in Cardiff and Newcastle till she entered at age twenty-two.

Phyllis entered on 23 January, 1929 at Lochinvar and was given the name of Sister Mary Marcella. Mother Mary Catherine was her Novice Mistress until July when Mother Mary Bernadette was appointed. After her Profession on 1 July, 1937 Sister began her work in the branch houses of the Congregation, teaching Primary School classes in Cessnock (Mt St Joseph’s), Aberdeen, Taree, Dungog, Wauchope, Charlestown, Krambach, The Junction, Lochinvar, Gloucester, Port Macquarie, St Patrick’s Cessnock, Wingham, Largs, Edgeworth, West Wallsend, Bulahdelah, Belmont and Tuncurry up to 1975.

During the 1933 Jubilee year Sister Marcella was at Lochinvar to assist with the organising of the celebrations. In 1956-57 she taught at the Greta Migrant Camp and in 1976 to 1978 worked as a Catechist on the Gresford Motor Mission.

Sister Marcella returned to her Gresford appointment in January 1978, where she had a sudden coronary attack in February and was hurried to Maitland Hospital, her first stay in hospital! In April she was completing her convalescence at the Belmont Convent, expecting to be soon back on duty. About nine o'clock she went to catch a bus to Newcastle. She was feeling so well that she declined the suggestion that someone should drive her. Before the bus had passed the Belmont depot the person seated behind her noticed her swaying slightly and upon investigation found that she had already died from another coronary thrombosis. The date was 17 April, 1978.

Sister's remains were brought to Lochinvar and after a Requiem Mass she was buried in the Sisters' section of the Lochinvar Cemetery.