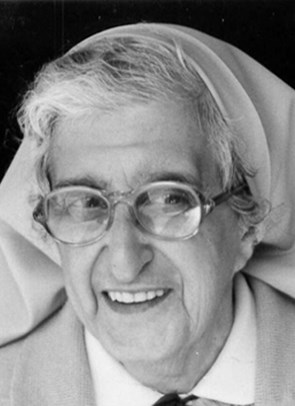 Ada Sadie Nicey, born on 7 July 1903 in Denman, was the second child of Louis Nicey, a storekeeper and Fameah Basha. Both her parents were born in Lebanon. Her older sister was Olga Adele and her younger sisters were Miriam and Lyle.

After working as a secretary, Ada entered the Novitiate in Lochinvar on 6 January 1930, aged twenty-seven with her younger sister, Miriam.

Ada was given the name Sr Mary Mark and Miriam became known as Sr Mary St Luke.  Both sisters were professed as Sisters of St Joseph on 6 July 1932.

After her profession Sr Mary Mark was appointed to Cundletown thus beginning a long life of service as a music teacher.  She loved music and enjoyed teaching music. Over the next sixty years she moved around the Maitland-Newcastle diocese and beyond: to Dungog,  Krambach, Wingham, Carrington, Merriwa, Wingen, Aberdeen,  Kendall, Port Macquarie, Cessnock, Newcastle, Merewether Beach, Denman, Clifton Gardens and Charlestown until her final appointment in 1987 to the Sydney suburb of Summer Hill.

Because of the length of her active ministry and the number of places where she taught, Sr Mary Mark influenced thousands of children with her enthusiasm and love for music. She was known for her excellent rapport with people.  She had a great gift of focusing on their needs and this made people very comfortable in her company. She also had the gift of affirmation — the ability to see the good in others and to affirm them for it. Her gentleness and quiet unobtrusiveness were an indication of her close communion with God and her devotion to the Eucharist, Mary and Joseph.

Though small of stature Sr Mary Mark had a very large heart. She was a most gracious person.  She kept very active to the end of her days, one of her interests being the beautiful needlework she produced.

Sister Mary Mark died suddenly at Summer Hill Convent on 15 December 1992 and is buried in the Sisters’ Cemetery at Lochinvar.