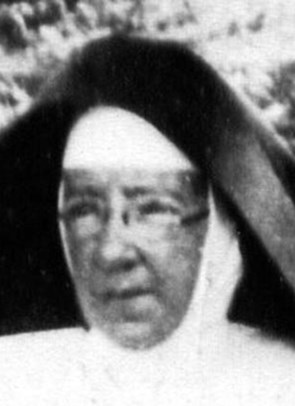 Irene Bowe was born on 17 August 1896 in Singleton. She was one of four children – three daughters and one son born to William and Catherine (nee Cooper) Bowe. Later the family moved to Kurri Kurri where Irene went to the Convent school.

Irene entered the Novitiate at Lochinvar on 23 January 1917, was given the name of Sister Mary Matthew and was professed as a Sister of St Joseph on 2 July 1919. She then began her ministry of teaching, mostly in the Infant classes throughout the Diocese of Maitland, firstly at Lochinvar and then at Carrington, Merriwa, West Wallsend, Denman, Cessnock, Charlestown, Summer Hill (Archdiocese of Sydney), Shortland and finally Taree.

A gentle, warm and retiring person, Sister Mary Matthew loved teaching the “little ones” and for over thirty-five years prepared many young children for their first Holy Communion. She conveyed to the children her great love of our Blessed Mother. This love of Mary was very significant as she died on the Feast of the Immaculate Heart of Mary, 22 August 1960.

Though never of robust health, her death came suddenly and unexpectedly as she had been at school in Taree as usual in the morning, teaching Fourth Class. On returning to the convent she had her dinner at 12.30 after which she was standing talking when she complained of a bad headache and soon became unconscious. Both the priest and the doctor were called. Father came in time to give her a blessing but when the doctor arrived a few minutes later she had died with her stunned community around her.

Her body was taken to the Rosary Church where the next morning Mass was offered for her by the priests of Taree parish and attended by a large congregation. Her mortal remains were then conveyed to the mother house at Lochinvar. The obsequies took place in the chapel at St. Joseph's, Lochinvar on 24 August. Very Rev. Father Fitzgerald pre­sided in the sanctuary and a large number of relatives and friends besides the Community were present.

After the chanting of the office by a choir of about thirty priests, Holy Mass was sung by Rev. Maurice Cahill. Fathers Smythe (Shortland) and Ryan (Taree) were the Deacon and Sub-deacon respectively. Rev. L. O'Dwyer (Taree) was Master of Ceremonies. The internment took place immediately after the Mass in the Lochinvar cemetery.