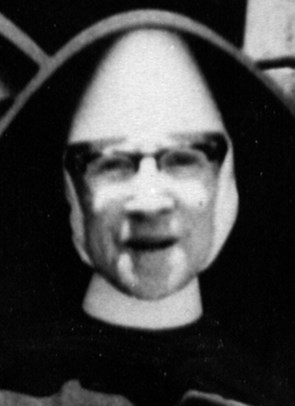 Mary Needs was born in Kempsey on 23 May 1895. Her father, James Needs was a school teacher in the Manning district for many years and her mother, Mary belonged to the well-known Catholic family of Moylans. In her own family circle Mary was given both Christian edification and a sound education.

In 1915 Mary entered the Novitiate at Lochinvar and became known as Sister Mary Mechtilde. She was professed as a Sister of St Joseph in 1918 at the age of twenty-three. In the ensuing years she humbly and earnestly followed the life and rule of the Sisters of St. Joseph. Her apostolate took her into many classrooms and music rooms of the convents and schools in the Diocese – into Denman, Wingen, Aberdeen and Lochinvar.

In 1948, Sister was withdrawn from the classroom to assume the more intensive and arduous work of Bursar-General of the Congregation, a work which she carried out with the utmost dedication and efficiency until her tragic death eighteen years later.

Mother M Mechtilde was returning to the Convent after having attended the Easter Vigil ceremonies in the parish church at Lochinvar when she was hit by a car as she crossed the New England Highway. She died almost instantly. Her companion, Mother Mary Anthony, the Secretary-General of the Congregation, was seriously injured in the accident and was admitted to Maitland Hospital in a critical condition. Both Sisters were anointed by Rev. Fr. G. Flatley before Mother Mary Mechtilde's death on Easter Sunday morning, 10 April 1966. Mother m Anthony survived the accident.

The Solemn Requiem Mass and Office for her soul took place in the Convent Chapel on Easter Tuesday, 12 April. A great number of people attended including eighty priests. His Lordship Most Reverend John Toohey, D.D., Bishop of Maitland, presided in the sanctuary and preached the panegyric. The celebrant of the Mass was Reverend Neal Ritchie, O.F.M. cousin of the deceased, with another cousin, Rev. Father Michael O'Halloran (Goulburn) as Deacon and Rev. Father Callinan as Sub-Deacon. The Cantors were Rev. Fathers Flatley and Delaney. Reverend B. McCosker was Master of Ceremonies. Nephews, Noel and David Kelly were altar servers.

Mother M Mechtilde’s whose death was a great shock to the congregation was laid to rest in the Sisters’ section of the Lochinvar cemetery.